Allegations about 40 gay priests in Italy sent to Vatican 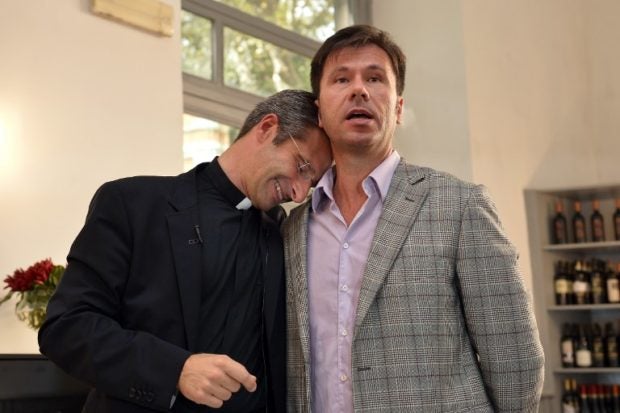 Father Krysztof Olaf Charamsa (left), who works for a Vatican office, gives a press conference with his partner Edouard to reveal his homosexuality on October 3, 2015, in Rome. The Vatican condemned the coming out of Charamsa on the eve of a major synod as a “very serious and irresponsible,” act which meant he would be stripped of his responsibilities in the Church’s hierarchy. AFP FILE

VATICAN CITY — The archdiocese of Naples says it has sent the Vatican a 1,200-page dossier compiled by a male escort identifying 40 actively gay priests and seminarians in Italy.

In a statement on the diocesan website, Cardinal Cresenzio Sepe said none of the identified priests worked in Naples. But he said he decided to forward the file to the Vatican because “there remains the gravity of the cases for which those who have erred must pay the price, and be helped to repent for the harm done.”

The dossier, containing WhatsApp chats and other evidence, was compiled by a self-proclaimed gay escort, Francesco Mangiacapra. He has told Italian media that he outed the priests because he couldn’t stand their hypocrisy any longer.

None of the 34 priests or six seminarians was accused of having sex with minors, Mangiacapra was quoted as saying in the diocesan statement.

“We’re talking about sins, not crimes,” the escort was quoted as saying in the statement.

It’s the latest sex scandal to convulse the Italian church and the Vatican.

Read Next
Warm weather forecast all over on Monday
EDITORS' PICK
Esperon: ‘The master red-tagger is no other than Jose Maria Sison’
Ang init! Dagupan sizzles at 52 degrees Celsius
Get a chance to win 5G smartphones with Smart Signature Plans
Marian Rivera partners with JC to boost public health awareness
Mocking PH protests, China keeps 287 vessels in West Philippine Sea
Tired of your Wi-Fi signal problems at home? Here’s a solution!
MOST READ
Sharon Cuneta flies to LA to take some time off: ‘I need to breathe, collect myself’
Mocking PH protests, China keeps 287 vessels in West Philippine Sea
Trillanes to run for president in 2022 elections
Locsin tells Roque: Drop the subject, leave foreign affairs to me
Don't miss out on the latest news and information.