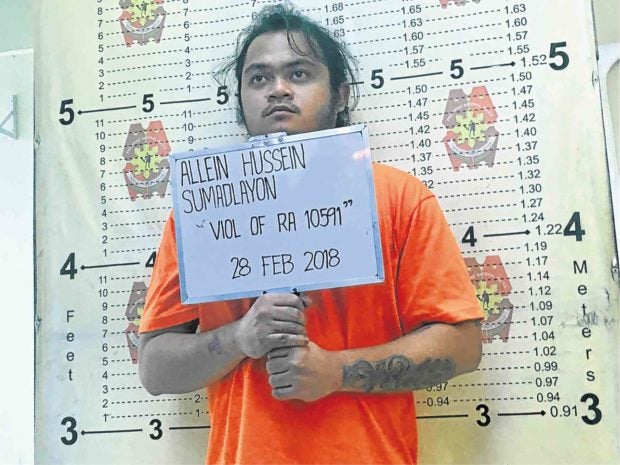 A man tagged in the killing of two dentists in Makati City in 2016 was arrested on Wednesday in a chance encounter with policemen who had flagged him down for a minor traffic violation.

Allein Hussein Sumadlayon, who has two standing warrants of arrest, was initially accosted for not wearing a motorcycle helmet.

The 27-year-old suspect was stopped by members of the Makati Police Community Precinct 10 who were manning a checkpoint at the corner of Bluevoz and Milkweed Streets in Barangay Rizal around 3 a.m. Wednesday.

But they ended up taking him to the police station after he was found carrying an unlicensed .38-caliber revolver.

When asked for his identity, Sumadlayon gave a fictitious name but one of the arresting officers recognized him, according to Senior Insp. Roman Salazar, Makati police investigation section chief.

In a press conference, Makati police chief, Senior Supt. Gerardo Umayao said Sumadlayon, who also used Marco Santiago as his alias, had standing warrants of arrest for robbery and homicide,  issued by Branches 62 and 143 of Makati Regional Trial Court.

The charges were filed in connection with the deaths of Dr. Raquel Magsalin and Dr. Anthony Limos in July 2016. Sumadlayon and his cohorts are accused of robbing  and shooting both dentists dead at their Makati clinics.

In an interview with the Inquirer, Sumadlayon admitted the two killings, saying he and his accomplices posed as patients to get into the clinics.

He also admitted robbing and killing call center agent Leonille Zara in Barangay Palanan on July 4, 2017, when she refused to give up her bag.