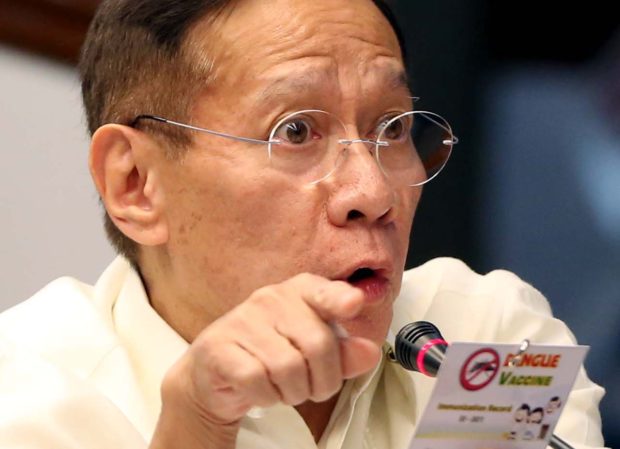 The Taguig City government on Thursday asked residents to remain calm, saying it was taking “all the necessary steps” to protect them after the Department of Health (DOH) declared a measles outbreak in one barangay.

According to a statement, City Health Office personnel have been going around Taguig’s 28 barangays to administer antimeasles vaccines to children aged 6 months to 5 years old, including those who were immunized in the past.

“Rest assured that the city government is doing all that it can for its constituents. I am also appealing to the residents to have their children immunized,” Mayor Lani Cayetano said.

“We have seven cases of measles in a barangay in Taguig in the last two weeks,” Health Undersecretary Eric Domingo told reporters, although he did not identify the affected area. “We have a response team to investigate and work to stop transmission of the disease. All the children are fine,” he added.

Domingo explained that measles or “tigdas” was a vaccine-preventable disease and “we should have zero cases.”

“So even if we have just one or two cases, it is considered an outbreak and transmission must be controlled,” he said.

According to Domingo, one of the factors for the outbreak was the low immunization coverage following a public health scare triggered by the national government’s scrapped dengue vaccination program. “One of the factors was the Dengvaxia scare,” he said.

In a news forum on Wednesday, Health Secretary Francisco Duque III said on Wednesday that outbreaks were not a remote possibility as more people become distrustful of vaccines due to the Dengvaxia controversy.

According to Duque, parents got scared of having their children vaccinated after French pharmaceutical giant Sanofi Pasteur revealed in November 2017 that Dengvaxia may cause some people to develop severe dengue if they had not contracted the disease before immunization.

He noted that since then, the DOH’s vaccination coverage rates had dropped as a result, from the ideal 85 to 90 percent to 60 percent early last month.

Duque said that should this trend continue, measles might be the number one disease to lead to an outbreak, along with rabies and polio.

Other vaccination programs for preventable illnesses, including measles, polio, tetanus and diphtheria have also suffered after the public scare, the health chief earlier noted.

Forensic experts from the Public Attorney’s Office have linked the deaths of 14 children to the dengue vaccine.

However, forensic pathologists from the University of the Philippines-Philippine General Hospital said that based on their findings, none of the deaths had been proven to be directly linked to Dengvaxia.