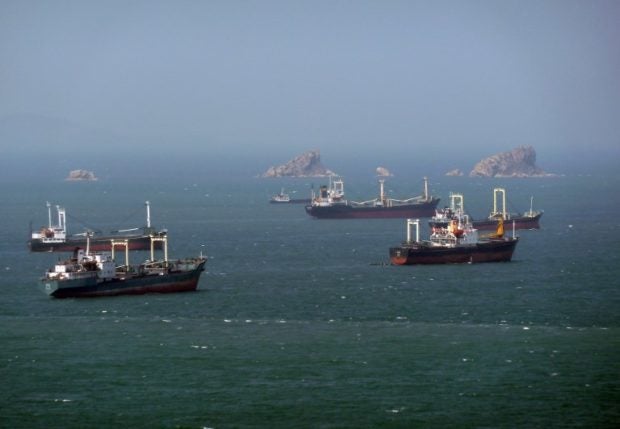 North Korean cargo ships wait their turn for entry to the West Sea Barrage dividing the Taedong River and the port of Nampo from the West Sea of Korea in April 2011. Latest US sanctions announced by President Donald Trump will target almost all ships used by North Korea. AFP

The “US should (be) aware that sanctions and pressure will never threaten (North Korea) and never work”, said Han Tae Song, Pyongyang’s envoy to the in Geneva.

The comments came days after Trump unveiled what he described as the “heaviest sanctions ever” levied on North Korea.

That may be an overstatement given past tough measures against Pyongyang approved by Washington, but Trump’s administration has confirmed that the new sanctions target virtually every ship North Korea is currently using.

North Korean diplomats repeatedly spar with US officials at the disarmament body in Geneva, a venue where the bitter rivals argue face-to-face.

“If the US ignores our sincere efforts for improving inter-Korean relations… but prefers provocation and confrontation, the DPRK will certainly respond,” Han said, using an acronym for the Democratic Peoples Republic of Korea.

Despite an apparent easing of tensions between Seoul and Pyongyang at the just concluded “peace Olympics” in the South’s city of Pyeongchang, Trump has pledged to maintain pressure on the North.

He has warned that if the latest sanctions do not work, “we’ll have to go to phase two. Phase two may be a very rough thing.”

Washington’s disarmament ambassador on Tuesday repeated his insistence that the United States would never accept North Korea as a nuclear-armed state.

“It will not happen,” Robert Wood said, replying to Han’s threats. /cbb