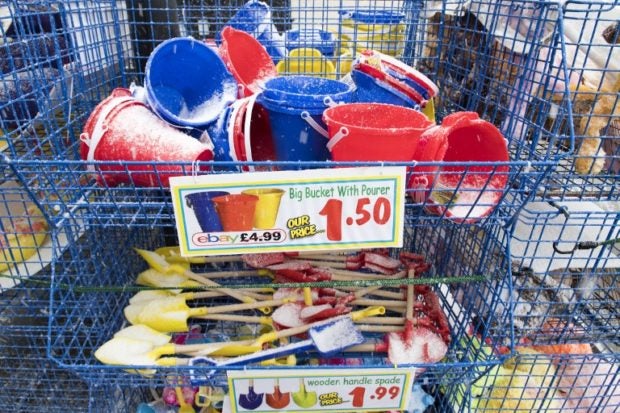 Beach toys are seen on sale as heavy snow falls in the sea side resort of Scarborough in North Yorkshire on February 27, 2018. A blast of Siberian weather sent temperatures plunging across much of Europe on Tuesday, causing headaches for travelers and leading to several deaths from exposure as snow carpeted palm-lined Mediterranean beaches. AFP

PARIS, France — Not for the first time in recent years, Europe has descended into a deep freeze while the Arctic experiences record high temperatures, leaving scientists to ponder the role global warming may play in turning winter weather upside down.

The reversal has been dramatic.

On Sunday, meanwhile, air temperatures at the North Pole — which won’t see the Sun until March — rose above freezing.

At the Longyearbyen weather station on the Island of Svalbard in the Arctic Ocean, temperatures were 10 C above average over the last 30 days, according to Zack Labe, a climate modeler at the University of California Irvine.

At the same time, sea ice is covering the smallest area in the dead of winter since records began more than half a century ago.

In one region, around Svalbard, the area covered by sea ice — 205,727 square kilometers — on Monday was less than half the average for the period 1981-2010, the Norway Ice Service reported.

“Positive temperatures near the North Pole in winter are thought to have occurred during four winters between 1980 and 2010,” Robert Graham, a climate scientist at the Norwegian Polar Institute, told AFP.

They have now occurred in four out of the last five winters.”

This acceleration, experts said, circumstantially points to climate change, which has — over the same period — warmed the Arctic region twice as fast as the global average.

Another clue may be the Arctic thaw/European deep freeze pairing.

“The surge of mild weather at the North Pole and the cold front in Europe are directly linked,” Etienne Kapikian, a scientist at Meteo France, the national weather service, told AFP.

“Just how hot is the Arctic now?” tweeted Peter Gleick, president emeritus of the Pacific Institute and a member of the US National Academy of Science.

“Hotter than ever measured in winter. Human-caused climate change is beginning to radically transform our planet.”

Gleick’s larger assertion is no longer seriously contested, but the link between the “warm Arctic, cold continent” phenomenon and global warming has yet to be proven, other scientists say.

If the connection with global warming remains speculative, the mechanics of what scientists call “sudden stratospheric warming” — the weird winter weather’s immediate cause — is well understood.

Strong winds in the stratosphere circulate west-to-east over the Arctic some 30 kilometers above Earth’s surface. This is the polar vortex.

The jet stream, meanwhile, races in the same direction at bullet-train speed 10 kilometers overhead at the upper boundary of the troposphere, the lowest layer of the atmosphere.

Sometimes the vortex dramatically warms and weakens, with winds slowing down and even reversing, explained Marlene Kretschmer, a climate scientist at the Potsdam Institute for Climate Impact Research.

“When this happens, it can affect the jet stream where our weather is made,” she told AFP. “That is exactly what has happened now.”

Freezing Arctic air that is normally “locked” in the polar vortex breaks out, creating the Siberian cold front that has blanketed Europe.

Sudden stratospheric warming occurs, on average, every other year, so it is not a rare phenomenon.

But over the last two decades, the vortex’s breakdowns have become deeper and more persistent.

“Overall, the global warming trend is clear,” said Kretschmer. Earth’s average surface temperature has gone up by one degree Celsius since the mid-19th century — enough to unleash deadly drought, heatwaves, and storms engorged by rising seas.

“But if you just look at winter temperatures since 1990, you see a cooling tendency in winter over northern Eurasia.”

Still, the question remains: What drives changes in the intensity and duration of sudden stratospheric warming?

One theory holds that newly ice-free ocean surface — which absorbs the Sun’s rays rather than bouncing them back into space like snow — releases warmth into the air that eventually disrupts the stratosphere.

“It is hard to say that any one event is linked to global warming,” said Kretschmer.

“But there are a lot of studies now suggesting this pattern — warm Arctic, cold continent — could be linked to climate change.”

“This much is certain — there is overwhelming evidence that changes in the Arctic will affect our weather,” she added. /cbb

Read Next
Sereno goes on leave, gets ready for impeachment trial
EDITORS' PICK
NUSTAR Resort and Casino: Cebu’s next lifestyle and leisure gem
EDITORIAL: Solo parents deserve more
Enjoy the best of city living at SMDC’s Fame Residences
Step up your vlog game with vivo’s newest smartphone
No more need to quarantine foreign arrivals if fully vaxxed
Guanzon: Senator behind delay in Marcos DQ case
MOST READ
Guanzon to Bongbong Marcos camp: How do you know I had ‘minority opinion’ on DQ cases?
Guanzon gives Ferolino until Monday to release reso on Bongbong Marcos’ DQ cases, or else
Guanzon: Senator behind delay in Marcos DQ case
Marcos a no-show in another GMA interview
Don't miss out on the latest news and information.