Sereno goes on leave, gets ready for impeachment trial 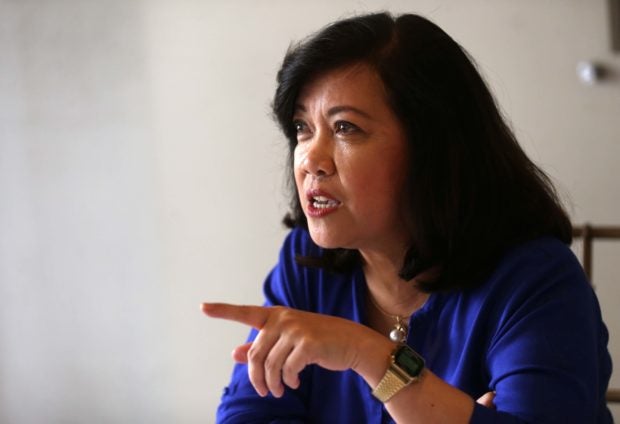 IT AIN’T OVER Chief Justice Maria Lourdes Sereno maintains she did not commit any impeachable offense and has no plans to resign, her spokesperson says. —LYN RILLON

Chief Justice Maria Lourdes Sereno, who is widely expected to be impeached by the House of Representatives, decided to go on leave starting Thursday after she met with other members of the Supreme Court during their weekly full-court session on Tuesday.

Whether Sereno is taking a two-week rest or an indefinite leave depends on who is talking.

Her spokespersons said the Chief Justice would take a two-week leave, from March 1 to 15, ahead of her scheduled one-week leave.

But there were reports quoting Supreme Court insiders that Sereno was forced by her Supreme Court colleagues to go on indefinite leave.

“She’s filing a wellness leave effective March 1 to 15, during which she intends to prepare her defense” for her [impending] impeachment trial, one of Sereno’s spokespersons, lawyer Josa Deinla, said in a message to reporters.

In a statement, presidential spokesperson Harry Roque on Tuesday advised Sereno to “consider what would be best” for the Supreme Court during her leave.

The announcement of Sereno’s leave came as the justice committee of the House of Representatives neared the end of its deliberations on an impeachment complaint against Sereno.

The complaint accuses her, among other alleged offenses, of not filing mandatory statements of assets, liabilities and net worth (SALNs) dating back a decade before she became the Chief Justice in 2012, buying a luxury vehicle with public funds and making certain decisions without consulting her fellow magistrates.

It is widely expected that the 293-member House of Representatives, which is dominated by President Rodrigo Duterte’s political allies, will vote to impeach Sereno by the middle of next month.

Once Sereno is impeached, her case will be sent for trial in the Senate, which currently has 23 members. A two-thirds vote is needed to remove an official.

Senate President Aquilino Pimentel III told reporters that the chamber was now preparing for the impeachment trial of Sereno and that he ordered on Monday the robes to be used by the senators, who would be the judges in the impeachment court.

Congress goes on recess on March 23 and returns on May 14.

Deinla said Sereno was originally scheduled to go on leave from March 15 to 23.

The spokesperson would not comment on reports that the Supreme Court justices had asked Sereno to resign during their full-court session, and that Sereno had instead opted to go on leave.

Senate Minority Leader Franklin Drilon on Tuesday acknowledged “infighting” in the Supreme Court resulted in Sereno taking some time off to prepare for her impeachment trial.

“I don’t feel good about this. I feel sad at the state of things. The fight between the justices becomes part of the public domain,” Drilon told reporters.

On the sidelines of the House justice committee’s last impeachment hearing on Tuesday, another Sereno spokesperson, Jojo Lacanilao, told reporters that the Chief Justice’s leave had long been scheduled even before the proceedings against her began.

Sereno will just take her regular break earlier than originally scheduled, Lacanilao said. “Her intention is to think about how to prepare for the Senate trial.”

Lacanilao added that the Chief Justice was not ill. “Even if we’re not sick, we need some kind of break, especially when facing stress,” he said.

“It’s not that she’s stressed out. If you say ‘stressful situation,’ that’s a correct description,” he added.

No plan to resign

Lacanilao said Sereno had no plan to resign. “She believes she did not commit an impeachable offense, so she has no plans to resign.”

Rep. Reynaldo Umali, chair of the justice committee, was peeved when he heard reports about the statements of Sereno’s spokespersons.

“What comes out of her mouth, her spokespersons’ mouths is different. Even the spokespersons have been infected by her lies,” Umali said of Sereno, as he presided over the last clarificatory hearing on the impeachment complaint against Sereno.

“There is a continuing pattern of lies and deception. On simple matters such as this, there are still badges of misrepresentation,” he said.

Deputy Speaker Gwendolyn Garcia upped the ante, causing the House justice committee to issue an order directing Lacanilao to explain why he should not be cited for contempt for saying that Sereno would be taking a wellness leave and was not forced to take an indefinite leave.

Garcia noted the contradictory news reports citing anonymous Supreme Court sources who said Sereno had been forced to go on leave by her colleagues.

“Attorney Lacanilao has given us once again what is obviously fake news,” she said.

Lorenzo Gadon, who filed the complaint against Sereno, told reporters that Sereno should just resign. “It’s very obvious that the writing’s on the wall and she would not get past this.”

Mr. Duterte has made no secret of his disdain for Sereno, the country’s first female Chief Justice, who has voiced concern about human rights and rule of law under his administration, though has stopped short of criticizing him directly.

Last October, the President dared Sereno to open her bank account to public scrutiny, accusing her of corruption and of being used by political opponents intent on driving him from power.

Sereno has not responded publicly to any of Mr. Duterte’s verbal attacks, but she denies wrongdoing.

Some of the President’s critics speculate that his loyalists driving the impeachment move are uncomfortable with the prospect of Sereno holding the Supreme Court’s top post until in 2030, when she reaches the mandatory retirement age of 70.

Sereno may become the second Chief Justice to be impeached after Renato Corona was removed during a Senate trial in 2012, also for not disclosing income. —Reports from Dona Z. Pazzibugan, Vince F. Nonato, Christine O. Avendaño, DJ Yap and the wires