Lawmakers’ call to Filipinos: Unite and keep fighting for your rights 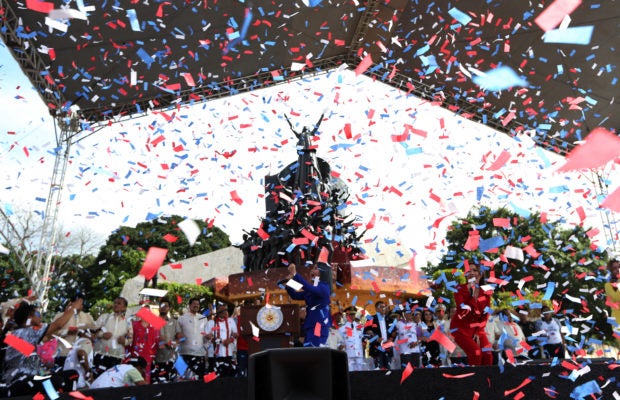 Confetti falls down at the People Power Monument in Quezon City on Sunday, Feb. 25, 2018, during the 32nd anniversary celebration of the EDSA People Power Revolt . This year’s commemoration has the theme “EDSA 2018: Effecting Change Towards Strengthened Democracy.” (Photo by NIÑO JESUS ORBETA / Philippine Daily Inquirer)

Unite as one country and keep fighting for your rights, Sens. Leila de Lima and Joel Villanueva said on Sunday as they joined the country in commemoration of the 32nd anniversary of EDSA People Power Revolution.

[Are we going to allow to be cast aside the democracy that millions of Filipinos fought for, an act that the whole world admired. Are we just going to remain silent in the face of the deceit being openly perpetrated on the people?]

[May we continue this movement so that many of our countrymen may come to realize to the truth and so that the light of justice will return to our motherland.]

Meanwhile, Villanueva also highlighted the importance of being one as a country in the midst of controversies.

“Our unity gives us strength, and as one nation, we can conquer any obstacle,” Villanueva said in another statement.

Earlier, former President Fidel V. Ramos – who in February 1986 joined then Defense Minister Juan Ponce Enrile in breaking away from President Ferdinand Marcos – emphasized that the country learned the importance of “unity, solidarity in values and teamwork in nation-building” during the bloodless revolution.

“The 1986 Edsa People Power Revolution was only the start of our transformation,” Ramos, who joined the celebration at the People Power Monument, said. “That is not the end. As Professor Winnie Monsod [economist and TV show host Solita Monsod] said, we are just beginning. And the outcome, which is a better future for all Filipinos, must be done by its succeeding administrations.”