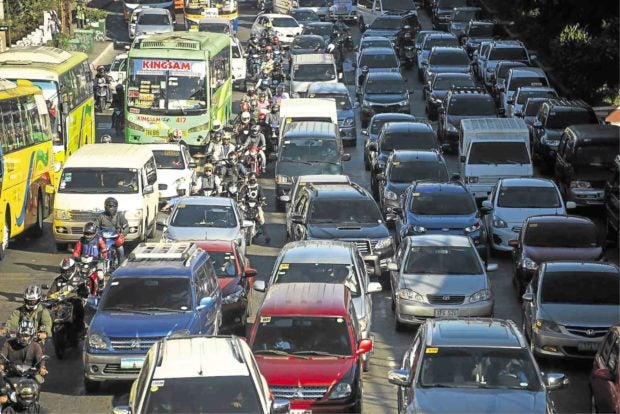 Five hours daily is what Celest Colina spends on the road to report for work in Makati City and to get home in a subdivision near Fairview in Quezon City.

“It’s really exhausting to be a commuter,” said Colina, 28, a social media worker. “The time spent on the road I could have spent with my 3-year-old daughter.”

Her officemate, Dennis Maliwanag, drives a car to report for work and to get home in the same area in Quezon City (a total distance of about 60 kilometers), also spending five hours on the road. Gasoline costs him P1,500 every five days.

They are among the millions of residents suffering from the worsening traffic congestion in Metro Manila that now costs at least P3.5 billion in lost opportunities per day.

The huge cost for 2017 due to traffic congestion was presented on Thursday by the Japan International Cooperation Agency (Jica) at the 36th Joint Meeting of the Japan-Philippines Economic Cooperation Committees in Makati.

“The traffic situation is really bad. It’s an understatement,” Transportation Secretary Arthur Tugade said of the cost of congestion.

“I still feel there are solutions that can address the problem of MRT (Metro Rail Transit),” Tugade  said, referring to the procurement of spare parts, tapping anew Sumitomo Corp. and its technical partner Mitsubishi Heavy Industries, and privatizing its operations.

The MRT 3 line on Edsa has been plagued with technical problems, grounding trains and adding to the woes of commuters in Metro Manila.

Tugade said the Department of Transportation was in talks with Metro Pacific Investments Corp., which had offered to take over the operations and rehabilitation of MRT 3.

At P3.5 billion, the cost in 2017  is higher than the estimated P2.4 billion for 2012, which was later included in the Mega Manila transport road map approved by the government in 2014.

By 2025, Metro Manila’s population would be 16 million and that of Mega Manila, including Bulacan, Laguna, Rizal and Cavite, would be 38 million.

“So Mega Manila will be larger,” Ito said. “It will be one of the largest cities in the world.”

As a consequence, the metropolis will be more congested, while the four surrounding provinces will “see more rapid growth,” he said.

Under the program, the government plans to roll out 75 “game-changing” projects, with about half targeted to be finished within President Duterte’s term.

A total of more than P8 trillion would be spent on hard and modern infrastructure until 2022 to usher in “the golden age of infrastructure” after years of neglect, the administration said.

“The conclusion that we have is that ‘Build, Build, Build’ is a move in the right direction. It’s a must do,” Ito said.

“Bottlenecks will still remain in the outer area,” the Jica official said, “so additional projects should be implemented.”

Ito said the initial phase of the Metro Manila Subway Project was one of the initiatives that could ease traffic congestion in the metropolis.

Socioeconomic Planning Secretary Ernesto Pernia said during the meeting that the groundbreaking for the subway project was targeted in the third quarter of this year instead of early next year.

The 25.3-km underground rail will connect Mindanao Avenue in Quezon City and Food Terminal Inc. in Taguig City, with a spur line to Ninoy Aquino International Airport in Pasay City.

The Neda ICC-CC is cochaired by Finance Secretary Carlos  Dominguez III and Pernia, who heads the state planning agency Neda.

The higher project cost reflected an appraisal by Jica, according to Tungpalan.

Last week, Tugade said his department wanted to speed up the partial opening of the subway system to the last quarter of 2021, earlier than 2022 that the Philippine and Japanese teams had agreed on.

The subway, to be financed by the Japanese government, is targeted to be completed by 2025.

Dominguez previously said that the loan agreement for the country’s first underground rail system would be signed in March.

To fast-track the big-ticket infrastructure projects, Pernia said the government planned to hold job fairs in the Middle East before the end of the first quarter to lure back highly skilled Filipino engineers to help in “Build, Build, Build.”

Pernia said private contractors should be able to match the higher salaries that overseas Filipino workers were enjoying so they could be enticed to return home. —WITH REPORTS FROM JUAN V. SARMIENTO JR. AND MIGUEL R. CAMUS