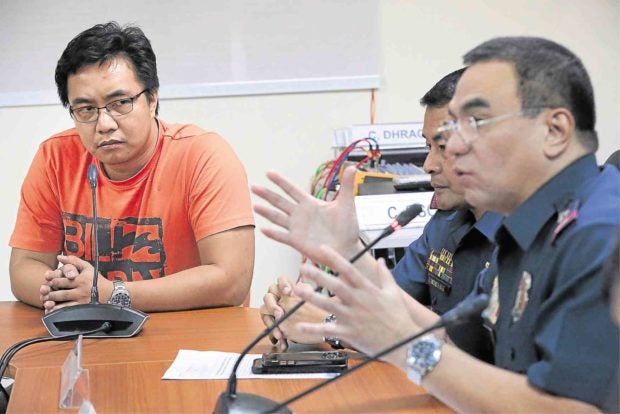 The police are preparing to file a charge of homicide against a lawyer and his companions who survived an ambush in Quezon City last week, wherein they were able to fight back and kill one of the gunmen while wounding another.

“It is true that Cabatbat is the victim, but it is procedural to file the case because someone died,” Eleazar told the Inquirer on Thursday. “We will let the prosecutor decide if the charges will be filed before the court.”

Sought for comment, Cabatbat said the police were simply doing their duty and expressed confidence he would be able to prove that he acted in selfdefense.

“Should they file a case against me, I am confident that I can successfully defend myself,” he said in a text message to the Inquirer. “The truth will come out and it will become clear that I only acted in selfdefense within the bounds of the law.”

“I have been successful in protecting my clients so I am confident that I can do it for myself, too, especially now that I am sure I did not commit any crime,” he added.

Cabatbat was on his way home on Feb. 13 when motorcycle-riding men shot his vehicle. Ramos fired back, using a 9mm pistol the lawyer kept inside the car. He hit one of the gunmen, later identified as PO1 Mark Ayeras, a policeman assigned to the National Capital Region Police Office who had been Awol (absent without official leave). Ayeras was killed while another gunman, John Paul Napoles, was wounded and arrested.

The police earlier confirmed that charges of illegal possession of firearms would also be filed against Cabatbat and his companion after the lawyer failed to present any papers for the gun.

Cabatbat said the firearm belonged to his uncle. This was confirmed by the Philippine National Police’s Firearms and Explosives Office although it noted that the documents for the gun were not updated as it was still registered in the previous owner’s name.

“There was a deed of sale but it wasn’t properly registered. In this case, we will file charges against Cabatbat and Ramos who allegedly fired the gun as well as Cabatbat’s uncle and the old owner of the weapon,” he said.

Autopsy results from the National Bureau of Investigation showed that Ayeras died due to gunshot wounds he sustained during the firefight. The cause of his death was initially unclear since Cabatbat’s driver also rammed the motorcycle carrying Ayeras.

The Quezon City Prosecutor’s Office last week recommended the filing of charges of attempted murder and illegal possession of firearms against Napoles. A third suspect remains at large.