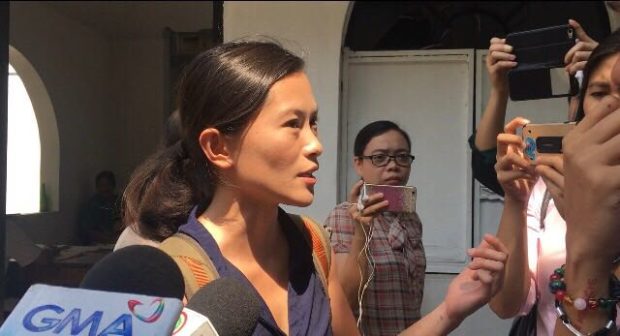 The news website Rappler on Wednesday said it would protest President Rodrigo Duterte’s order to ban it from covering him, and demand an apology from the commander of the presidential guards for threatening its reporter Pia Ranada.

Lawmakers, rights and media groups also slammed the ban as a threat to freedom of the press in the Philippines.

In a statement sent to the Inquirer, Rappler said it would send a letter to Executive Secretary Salvador Medialdea to protest the ban.

As for the commander of the Presidential Security Group (PSG), Brig. Gen. Lope Dagoy, Rappler said his statement against Ranada was “conduct unbecoming an officer and gentleman, coming as it did from a soldier who took his oath to defend civilians, who stands closest to the seat of power, and who serves an organization that has shown, time and again, its respect for and appreciation of civilian institutions such as Rappler.”

“We ask General Dagoy to apologize for his outburst or for his superiors to take him to task for threatening to use force outside the battlefield,” Rappler said.

Defense Secretary Delfin Lorenzana on Wednesday expressed disapproval of Dagoy’s remark about Ranada, saying the military official had “no right” to threaten journalists.

“That remark is uncalled for and really off the mark. Whatever Rappler’s offense, the PSG had no right to harm Rappler’s people nor threaten them,” Lorenzana said in a text message sent to reporters covering the Department of National Defense (DND).

Lorenzana, however, called for understanding, attributing Dagoy’s outburst to pressure at his job.

Ranada was later allowed to attend a news conference by presidential spokesperson Harry Roque but prohibited from covering the activities of President Duterte.

Mr. Duterte himself reportedly gave the order to ban Rappler from the Palace.

After seeing a video of Ranada and ABS-CBN reporters questioning a Palace guard, Cpl. Marc Cempron, about the ban, Dagoy said he did not like what the journalists did.

In an interview with Assistant Communications Secretary Mocha Uson, Dagoy accused Ranada of “bullying” Cempron by repeatedly asking him about the ban.

Dagoy was also angry with the ABS-CBN reporters who questioned Cempron about the ban.

“Why did they have to push the mic at my soldier, who told them he had nothing to tell them?” Dagoy said in a video uploaded to Uson’s Facebook page.

The reporters should have called officials at the Presidential Communications Operations Office if they wanted to ask questions about the ban, he said.

Dagoy warned that any reporter who would do a similar thing would be banned from Malacañang.

“Next time that happens to my soldiers again, I will ban you from the whole Malacañang complex,” he said.

A video taken by Ranada shows Cempron politely telling her he is simply following orders.

Ranada asks Cempron, also politely, for details of the ban, but the Palace guard walks away.

He asks her to stop taking a video of him, but she tells him the public has the right to know the rules imposed by Malacañang.

Dagoy on Wednesday stood his ground, challenging Rappler to show the whole video.

He said Rappler selected portions of the incident to picture him as the “bad guy.”

“Is that the standard of Rappler’s media investigation? Me to apologize? In their dreams! They should apologize to my soldier,” he said.

“It could portend a broader assault on journalists and news organizations, whose critical watchdog role has magnified the government’s poor human rights record,” it said in a statement.

Press coverage of public affairs “is not a matter of trust, especially for the Office of the President,” ACT Teachers Rep. Antonio Tinio said, referring to presidential spokesperson Harry Roque’s statement that Rappler was “paying for the loss of the President’s trust.”

“This is a clear evidence. We have a President who does not recognize the freedom of the press,” Tinio said.

Bayan Muna Rep. Carlos Isagani Zarate called on journalists to protest the Palace moves against those who reported about controversies hounding the administration.