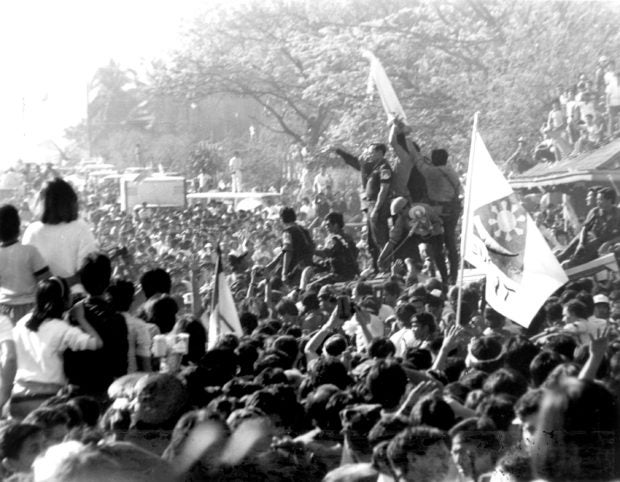 From Ninoy Aquino’s assassination on Aug. 21, 1983, to the first Edsa People Power Revolution on Feb. 25, 1986, the yellow ribbon — and later on, yellow shirts, yellow banners and yellow confetti — became the symbol of hope for Filipinos protesting against tyranny and yearning for freedom. It became a badge of honor, a sacred medal worn with pride.

Inspired by the 1973 hit song “Tie a Yellow Ribbon Round the Ole Oak Tree,” yellow ribbons were supposed to welcome Aquino upon his arrival in Manila after three years of exile in the United States.

His murder on the airport tarmac became the spark that ignited a peaceful revolution three years later.

These days, however, yellow has come to signify a spent political force, and worse, something to look down upon with scorn.

President Rodrigo Duterte’s rabid supporters sneer at just about anyone who dares speak out against him, calling his critics “dilawan (yellows).”

To be called dilawan is almost akin to being stamped with the Star of David at the height of Hitler’s purge of Jews in World War II.

How could something good three decades ago look so bad today?

Looking back, the months and years following the glorious four days at Edsa were fraught with confusion and violence.

The then newly installed revolutionary government of President Cory Aquino seemed overwhelmed, if unprepared, to put order to the chaos that followed the collapse of Ferdinand Marcos’ regime.

On July 6, 1986 — just five months after Mrs. Aquino took her oath of office — 490 armed soldiers and 15,000 civilians loyal to Marcos occupied Manila Hotel for 37 hours in an apparent coup attempt.

On Jan. 22, 1987, police and military forces dispersed a farmers’ march near Malacañang, killing 12 and injuring 51 participants. The incident came to be known as the infamous Mendiola Massacre.

On Aug. 28, 1987, members of the Reform the Armed Forces (RAM) Movement — lauded as heroes of Edsa — staged a bloody attempt to topple the Aquino government, attacking Malacañang and Camp Aguinaldo, leaving 53 dead and more than 200 wounded. The casualties were mostly unarmed civilians.

This was followed by six more coup attempts.

Meanwhile, Mrs. Aquino’s administration was wracked by internal wrangling and allegations of influence-peddling.

Which is not to say, however, that her successors—Fidel Ramos, Joseph Estrada, Gloria Macapagal-Arroyo and Benigno “Noynoy” Aquino III—did not have their own problems and crises.

While FVR, Erap, GMA and P-Noy could boast their own achievements, these were unfortunately overshadowed by their share of scandals and debacles.

Rise of a populist

Such checkered history, faithfully documented by media, especially the Inquirer, led to resentment and disillusion, paving the way for a populist like Rodrigo Duterte to be elected President.

But, irony of ironies, the country’s new leader seems to be harking back to the Marcos way of doing things. Not unexpectedly, Mr. Duterte continues to deflect criticisms of his governance style nearly two years into his presidency.

Now, Mr. Duterte lumps all his critics derogatively as “the yellows” — a term that includes the Liberal Party bloc in the Senate, as well as various coalition groups that have been staging rallies to denounce his tendency to rule like a dictator.

Which brings us back to Mrs. Aquino. Notwithstanding her faults and missteps, her greatest contribution to the country was the restoration of democracy after 14 years of Marcos’ authoritarian rule.

The return of democracy has made it possible for Mr. Duterte, a practicing lawyer in Davao when Edsa happened, to enter politics.

Scouting for leaders to replace Marcos’ local officials, Mrs. Aquino asked Mr. Duterte’s mother, Soledad Duterte, to serve as vice mayor of Davao. The main reason was that Mrs. Duterte, or Nanay Soling, had led an anti-Marcos group, the Yellow Friday Movement, which staged protest rallies in Davao at the height of martial law and in the dying days of the dictatorship.

Mrs. Duterte declined, and instead recommended her son, whom Mrs. Aquino appointed officer in charge (OIC) vice mayor of Davao.

Last year, on Ninoy Aquino’s 35th death anniversary, Mr. Duterte issued this statement: “Throughout his career, he fought for what is right and just. Up until the very end of his life, he inspired a peaceful revolution that resulted in the liberties we enjoy today.”

“Even at a time when hope was lost, he remained steadfast in his struggle to restore democracy through nonviolent means. His deeds have taught us that we should always aspire for the common good—even if one must go against the grain—and do what is necessary.” he said.

What Filipinos wake up to every day, for the past 20 months, are acts of impunity that only a dictator has the gall to allow — the most repulsive of which, aside from thousands of extrajudicial killings and sending his top critic to jail, is cozying up to the Marcos family as a political ally.

Mr. Duterte had the patriarch’s remains buried at Libingan ng mga Bayani, in total mockery of the sacrifices of martial law victims and which the dictator’s family is using to try to revise history.

Mr. Duterte has likewise tolerated Ferdinand “Bongbong” Marcos Jr.’s own attempts to rewrite the Edsa narrative. The former senator, who has refused to accept defeat in his 2016 run for Vice President, has a well-oiled propaganda machinery operated by social media hacks whose main mission is to spread fake news.

These hacks have been feeding the internet with a series of videos that assume he would win in his protest against Vice President Leni Robredo, and, in time, even succeed Mr. Duterte as President.

Today the Philippines is at a dangerous crossroads. How to protect and preserve the democratic gains of Edsa is its biggest challenge.

Back in college, after the 1986 snap presidential elections, I remember Mrs. Aquino leading a people’s “victory rally” at Luneta, in which she called for civil disobedience including the boycotting of known Marcos-crony businesses.

I attended that rally wearing a cut-off yellow T-shirt, on the back of which I wrote: “F**k Marcos, Ver, the Batasang Pambansa,” and other enablers of the dictatorship.

Now I realize it will take more than cussing — incidentally, a Duterte trademark — to keep the spirit of Edsa alive and our democratic space intact.