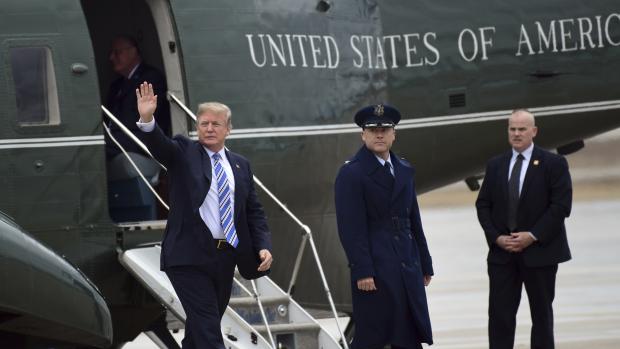 President Donald Trump waves as he walks off of Marine One and heads to Air Force One at Andrews Air Force Base in Maryland, Friday, Feb. 16, 2018. Trump is heading to Florida to spend the weekend at his Mar-a-Lago estate. (Photo by SUSAN WALSH / AP)

POMPANO BEACH, Florida — President Donald Trump has made a grim trip to a Florida community reeling from a deadly school shooting, meeting privately with victims and cheering the heroics of first responders.

But he extended few public words of consolation to those in deep mourning, nor did Trump address the debate over gun violence that has raged since a 19-year-old gunman killed 17 and injured 14 others.

Two days after the shooting, Trump visited Broward Health North Hospital Friday, where he saw two victims and praised the doctors and nurses for their “incredible” job. With his wife Melania, he also paid his respects to law enforcement officials in Fort Lauderdale, telling officers he hoped they were “getting the credit” they deserved.

“I was at the hospital with a lot of parents and they are really thankful for the job you’ve done,” Trump said at the Broward County Sheriff’s Office, where he was joined by Gov. Rick Scott, Sen. Marco Rubio and other Florida officials. He added that the young victims were in “really great shape” considering what they have been through.

Never a natural at consolation, the president seemed more at ease extending hearty thanks to first responders, marveling at the speed with which they rushed the wounded to the hospital and quipping that they deserved a raise.

He had less to say to the grief and sorrow gripping a shocked community and nation after the deadliest school shooting since a gunman attacked an elementary school in Newtown, Connecticut.

Asked if he’d talked with victims of the shooting at Marjory Stoneman Douglas High School in Parkland, Trump added: “I did indeed, and it’s very sad something like that could happen.”

Trump spoke privately with two victims, a boy and a girl, at the hospital. At the Sheriff’s Office, he also met Detective Richard Olson and his son, Will Olson, who was shot during the attack. Trump spoke about the girl he met with, saying she had been shot four times, and that first responders had helped save her life by getting her quickly to the hospital.

Late Friday, he tweeted about the school shooting: “Our entire Nation, w/one heavy heart, continues to pray for the victims & their families in Parkland, FL. To teachers, law enforcement, first responders & medical professionals who responded so bravely in the face of danger: We THANK YOU for your courage!”

He included pictures of the injured young girl and her family that he and the first lady visited.

Speaking directly to the raw emotions was Rubio, who told Trump, “This is a community and a state that’s in deep pain and they want action to make sure this never happens again.”

Trump replied: “You can count on it.”

Still, the president made no policy statements. An avid supporter of the National Rifle Association, he did not mention the renewed debate over gun violence, ignoring a shouted question about gun laws. Trump tweeted earlier Friday that he was “working with Congress on many fronts,” though he offered no details.

Trump’s visit followed a similar script to his visit to Las Vegas in the fall after the worst mass slaying in modern history. On that trip, he also made a visit to a hospital, meeting with victims behind closed doors and then congratulating first responders.

It’s an approach that stands in contrast to his predecessor’s handling of mass shootings. After the Sandy Hook slayings, five years ago, President Barack Obama attended an emotional vigil in Newtown, where he read aloud the names of each victim and promised to use “whatever power” he had to prevent future shootings.

Trump said he originally planned to visit the Parkland area on Sunday or Monday, but decided he didn’t want to wait.

But as Trump arrived in Florida, some of the parents, survivors and others affected by the tragedy at Marjory Stoneman Douglas High School said they were more interested in firm action to prevent future assaults than a presidential visit.

More than 1,000 people had attended a candlelight vigil Thursday night near the school, and at one point some began chanting, “No more guns! No more guns!”

The president made the trip to meet with first responders soon after Air Force One arrived in West Palm Beach for the president to spend the weekend at his Palm Beach estate, which is about 64 km (40 miles) from Parkland.

In a departure from the Trumps’ original schedule, Mrs. Trump arrived at Air Force One separately from her husband for the flight to Florida and boarded the plane while reporters were kept away. A spokeswoman said the change was due to scheduling.

As he departed the White House, Trump ignored shouted questions from journalists about a report in The New Yorker magazine that he had an affair in 2006 with a Playboy model.

Mrs. Trump spoke at the Sheriff’s Office. She thanked law enforcement officials “for taking care of our children” and added: “They were put through a lot in what they were experiencing two days ago and we need to take care of them.”