Senate set to open inquiry into deaths of OFWs on Feb. 21 | Inquirer News

Senate set to open inquiry into deaths of OFWs on Feb. 21 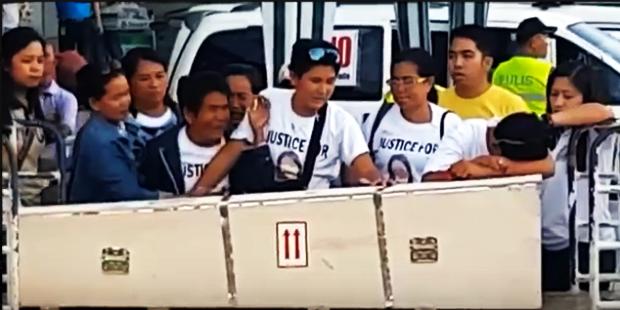 The remains of Joanna Demafelis, who was found dead in a freezer in an abandoned apartment in Kuwait City early this month, was flown to her family in Iloilo on Friday, Feb. 16, 2018. (Photo from a video by Inquirer Visayas)

The Senate will open on Wednesday, Feb. 21, its inquiry into the deaths of overseas Filipino workers (OFWs), including that of Joanna Demafelis, a domestic worker found dead in a freezer in Kuwait.

The investigation stemmed from two resolutions filed by Sens. Manny Pacquiao and Nancy Binay, who urged the Senate committees on labor and employment and foreign relations to look into the rising number of cases of abuses and violence among OFWs, particularly in the Middle East.

In filing Senate Resolution No. 626, Pacquiao said there was a need to “ferret out the truth” surrounding the deaths of these Filipino workers and to reexamine the government’s labor and foreign policies and programs in light of the continued abuses.

“The gruesome story of Joanna [Demafelis] mirrors the narrative of million other Filipinos who have sacrificed their lives to feed their families and incidentally boost our country’s economy only to be at the receiving end of abuses and maltreatment of foreign employers,” Pacquiao said.

Demafelis, who left for Kuwait in 2014 and had been reported missing for a year, was found dead inside a freezer in an abandoned apartment unit in Kuwait City early this month. Her body was flown home to her family in Iloilo on Friday.

In her resolution, Binay urged the Senate to look into the total ban the government imposed on the deployment of OFWs to Kuwait in light of Demafelis’ tragic fate and amid the investigation of the deaths of seven other Filipino household workers also in Kuwait.

Binay pointed out that roughly 250,000 Filipinos are working in Kuwait, 75 percent of which are household service workers. Over 400 OFWs have so far been brought back home from the Gulf country as part of the government’s mass repatriation program.

“The countless deaths and unceasing maltreatment of OFWs calls upon the Philippine government to further efforts to protect the rights and welfare of OFWs. It is also the duty of the Senate, by law, to protect [their] rights and privileges,” Binay said. /atm