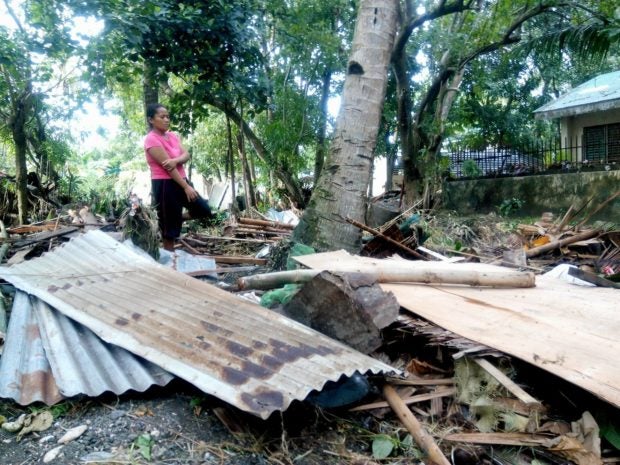 Mary Ann Berto, a resident of Barangay Guinsularan in Duero town, showed several pieces of woods left after her house stood was washed out on Tuesday night. Leo Udtohan/Inquirer Visayas

Although she anticipated it, the damage still shocked her.

“Nothing was left. It destroyed our teaching materials,” she said.

She said more newly delivered textbooks for senior high school students, new sewing machines and some computers could no longer be used because these were destroyed when floodwater mixed with mud swamped the school. 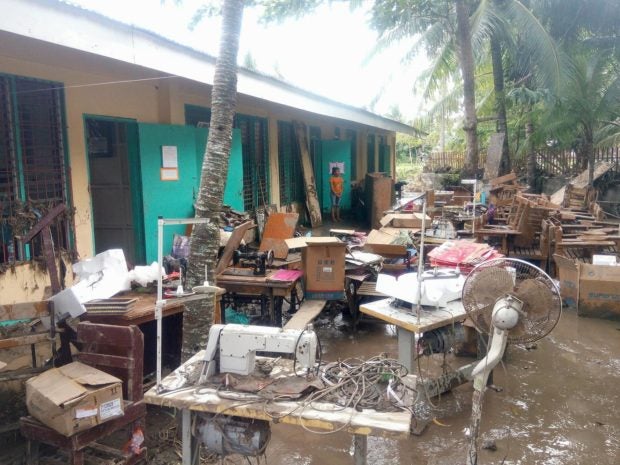 But students, with their parents and some volunteers, helped the teachers and school staff in cleaning up and repairing the school.

Jordan said classes would be suspended until Friday since they needed time to clean up the classrooms.

The school was flooded when “Basyang” dumped rains on the province on Tuesday night.

A portion of the school’s concrete fence fell due to the rampaging flood.

“Once computers get wet, they have to be replaced,” he added.

The flood and mud also damaged the desks, chairs, teaching materials and student records at the Guinsularan Elementary School (Annex) which is beside the high school.

Residents of Barangay Guinsularan said Tuesday’s flood was the worst to hit the town.

The flood made the roads impassable to all types of vehicles and destroyed the Guinacot Bridge.

Three residents who had to climb to the roofs of their houses were later rescued.

Mary Ann Berto, 38, of Guinsularan said she and her family stayed in a relative’s house following heavy rains on Tuesday night.

When she returned the next day, her house was gone as it was swept by the flood.

Eldest son Edmar Jun, 15 and Grade 9 student at Guinsularan High School lost his school supplies. But like many other students, he went to school to help clean out the mud.