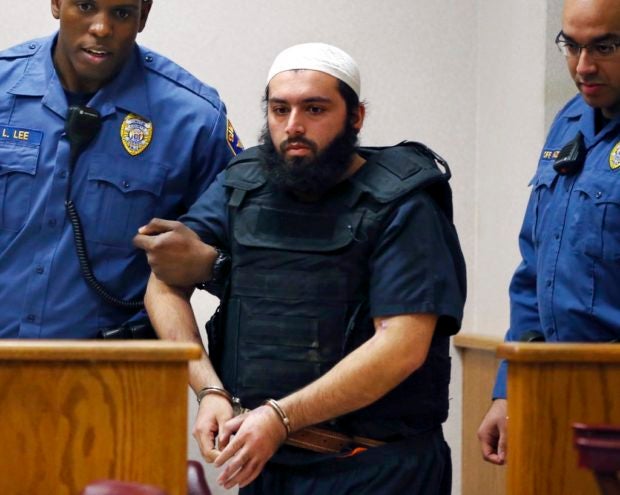 In this Dec. 20, 2016, file photo, Ahmad Khan Rahimi, center, is led into court in Elizabeth, New Jersey. Rahimi, who set off small bombs on a New York City street and at a charity race in New Jersey, is set to be sentenced to a mandatory term of life in prison. He is scheduled to be sentenced Tuesday, Feb. 13, 2018, by a federal judge in Manhattan. (AP Photo/Mel Evans, File)

NEW YORK—A New Jersey man who set off small bombs in two states, including a pressure cooker device that blasted shrapnel across a New York City block, was sentenced Tuesday to multiple terms of life in prison by a judge who repeatedly called it a miracle nobody was killed.

Ahmad Khan Rahimi, a naturalized U.S. citizen born in Afghanistan, was criticized by a prosecutor for failing to show remorse and was scolded by a victim for not apologizing to the 30 people he injured.

U.S. District Judge Richard M. Berman in Manhattan said it was hard to reconcile the “reasonable enough” man he saw in court with the terrorist who tried to kill as many people as he could when he left his home early the morning of Sept. 17, 2016, with two pressure-cooker explosives and a bag full of smaller bombs.

“You sound like most people and yet your actions are totally at odds with your voice,” Berman said.

“We saw videos,” he said, referencing multiple videos at his fall trial that showed Rahimi dragging bombs in two suitcases and a backpack through Manhattan streets, setting one down a half hour before it exploded in the upscale Chelsea neighborhood and another a few blocks away that was discovered and disabled before it could explode.

“It’s really hard to square the way you appear in court to that other behavior,” Berman said.

Regardless, the judge said, Rahimi deserved multiple life prison terms. One life term was mandatory but the judge exercised his discretion by imposing life sentences for counts that Rahimi’s defense lawyer said deserved only a 15-year sentence. He also ordered $562,803 in restitution.

Berman called Rahimi, 30, a “clear and present danger” and said it was too big a risk not to impose a life sentence, especially after Rahimi offered “not an ounce of justification” for his crimes.

The Chelsea explosion happened just hours after a small pipe bomb exploded along a Marine Corps road race in Seaside Heights, New Jersey, frightening participants but injuring no one.

The bombings triggered a two-day manhunt that ended in a shootout with police in Linden, New Jersey. Rahimi was shot several times but survived. Police officers also were injured.

Given a chance to speak, Rahimi, shackled at the ankles, portrayed himself as a victim, saying he came to America as a 7-year-old boy with no hatred for anyone and was raised by a father in a household where there was no mention of what his father experienced during the Soviet occupation of Afghanistan.

He described how his father went to law enforcement on multiple occasions to report suspicious behavior he had seen in his son, but ultimately felt let down.

“I don’t harbor hate for anyone,” Rahimi said before describing how he believed law enforcement targeted him once he became a practicing Muslim.

Assistant U.S. Attorney Shawn Crowley immediately followed Rahimi, saying he had just “blamed everyone else” after causing so much destruction through crimes “fueled by hate.”

“He has shown no remorse,” Crowley said. “He’s proud of what he has done.”

She described Rahimi’s efforts to radicalize fellow prisoners at the federal jail in New York where he has been imprisoned since his arrest.

Rahimi, prosecutors said, gave inmates copies of terrorist propaganda and jihadist materials, including speeches and lectures by al-Qaida founder Osama bin Laden and Anwar al-Awlaki, a U.S.-born cleric who inspired attacks on America and was killed in a U.S. airstrike in September 2011.

Rahimi also allowed some inmates to view materials on his laptop or provided electronic copies as he spread “The Book of Jihad,” bomb-making instructions and various issues of a propaganda magazine.

Defense attorney Xavier Donaldson called it ironic that his client had once aspired to be a police officer and worked as a security guard after studying criminal justice at a community college.

He urged a sentence not based on what people think terrorists might inspire or the fear they may cause.

After the sentence was announced, Berman invited several victims watching the proceedings to speak.

Pauline Nelson, 48, of Brooklyn, stepped to the podium. She was hospitalized when the car she was driving was jolted by the explosion. She’s still being treated for muscle spasms in her back.

“You never apologized to anyone in the courtroom,” she said, staring at the bearded Rahimi, who sat at the defense table, shackles on his ankles. “You have no remorse for what you did.” /jpv