A severe beating was what Grab driver Armando Yabut received after returning to passenger Jinno John P. Simon the cellphone which the latter forgot in the car, last Feb. 9.

The driver, a 30-year-old native of Sorsogon, first aired his plea for justice through a public post on his personal Facebook account (under the name Kiel Nigel Yabut) on Sunday, Feb. 11. He showed pictures of the injuries he sustained from Simon’s alleged battering. 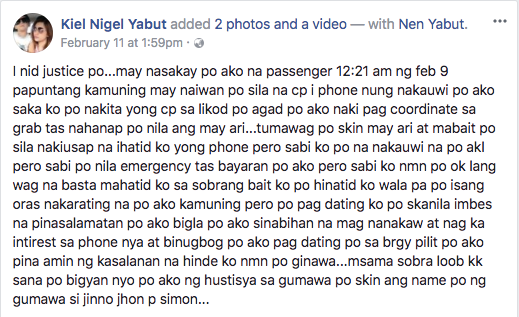 Today, Yabut showed INQUIRER.net a copy of his investigation data form, where he swore under oath and retold the story of the incident last Friday night.

According to Yabut, he picked up Simon and one girl at Greenbelt 3 in Makati City at midnight of Feb. 9 to bring them to Kamuning Bakery Cafe in Judge Jimenez St. Kamuning, Quezon City. Along the way, Simon asked if he could charge his cellphone, so Yabut handed him the connector and plugged it into the charging post. When they reached Kamuning Bakery, Yabut parked in front, thanked Simon and his companion, and told them to rate him.

When Yabut got home, he checked his car and found the cellphone still charging inside the drink holder; that was when he took a picture of it and called Grab Hotline to ask how he could return the forgotten phone. 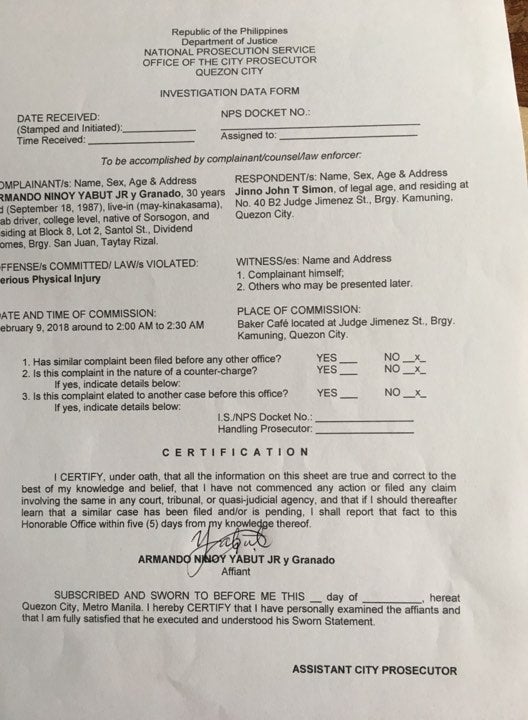 Grab Hotline reached out to Simon and gave him the cellphone number of Yabut’s operator, who is also his wife. Yabut said he and Simon talked amiably on the phone, and was requested by Simon to deliver the phone to him right then.

Simon went out of the gate when Yabut arrived at Kamuning Bakery Cafe; he got out of the car and was smiling when he handed the phone back to Simon. He told Simon, “Sir, eto na po yung cellphone mo.” (Sir, here is your cellphone.)

But Simon answered him, “Kaninong cellphone yan?” (Whose cellphone is that?)

Yabut repeated that it was Simon’s and that he left it in the car. Simon then started accusing him of being a robber. Before Yabut could respond, Simon pulled him by the neck using his right hand and started choking Yabut with his left.

Simon then dragged Yabut to three garbage collectors and told them, “Magnanakaw ito,” while punching him multiple times on the head. Yabut recalls his vision getting blurry and found himself sitting on the ground while he held his throbbing face. 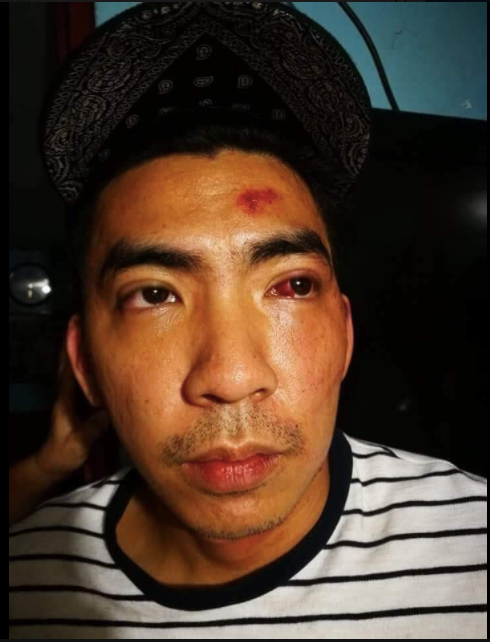 Simon reportedly continued to beat and choke Yabut until he fell to the ground; Simon then held Yabut’s face and shoved it down the cement pavement. Simon threatened him, saying he knew a lot of people and that Yabut didn’t know who he was.

When two police officers arrived and gave Yabut advice to file a complaint and sue, Simon suddenly became nice and told Yabut that perhaps they can just talk about what happened. Simon also apologized, saying he only hurt Yabut because of “init ng ulo” (hotheadedness).

When Yabut didn’t agree and told him he will file a complaint, Simon threatened him, “Ah ganun, gusto mo talagang tuluyan kita ha, sige tutuluyan kita.” (Oh, is that it? You really want me to go after you? Sure, I will go after you.)

When they got to the baranggay hall, however, Yabut said he was the one who became the accused and Simon the complainant, who blamed him of robbing his phone. 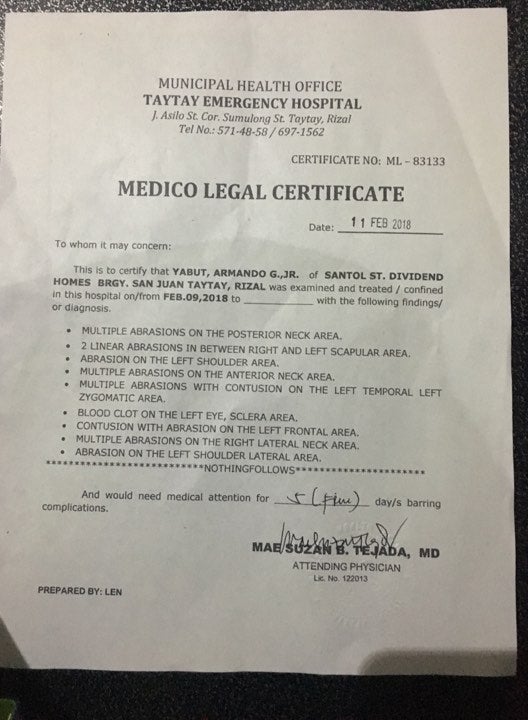 Jinno John P. Simon hasn’t been seen since the incident. There are no other known information about him other than his being a tattoo artist, but one netizen named Cocoy Alano shared pictures of Simon via his Facebook account, to help with identification. The photo was shared to Alano by an unnamed source. JB 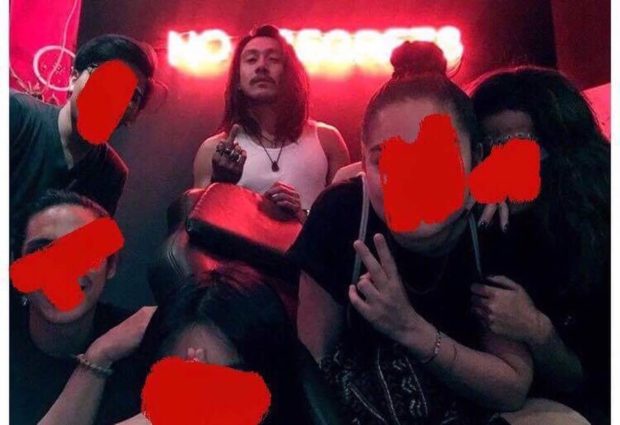 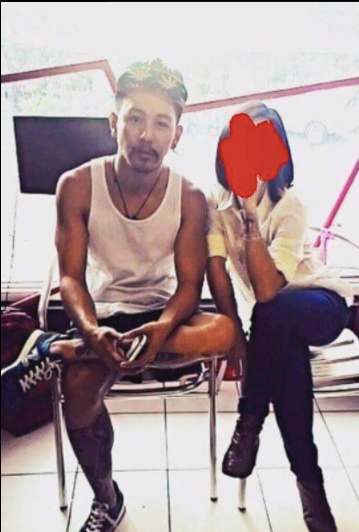 Grab driver sues ungrateful passenger who beat him up

Suspect in killing of Grab driver surrenders to police