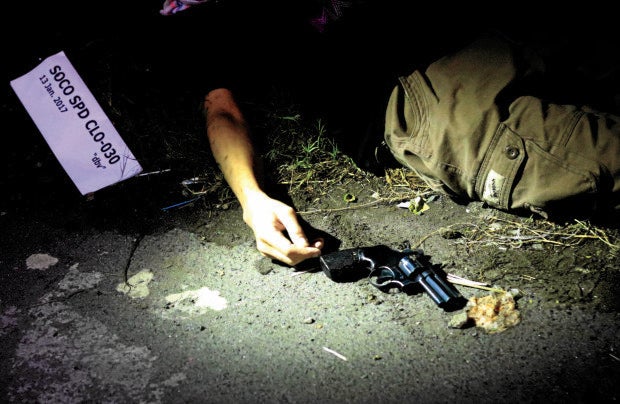 The body of drug suspect Jayson Reuyan lies on BAC-11 Street near the Parañaque River in Pasay City after he was killed in a police buy-bust operation on Jan. 13, 2017. (Photo by RICHARD A. REYES/Philippine Daily Inquirer)

Magdalo Rep. Gary Alejano on Tuesday shared some intriguing patterns in “Oplan Tokhang,” which is part of the anti-drug operations of the Philippine National Police (PNP), after his office obtained spot reports of raids from July 2016 to September 2017.

He said, however, that the analysis of the consolidated data might not be conclusive as this only constituted a small percentage of the total number of operations up to present.

Data from the interagency organization Real Numbers PH showed that from July 1, 2016 until Jan. 17, 2018, the police conducted 81,919 drug operations with 2,235 cases of homicide recorded.

“But we could draw some patterns,” Alejano, a former Marine captain, said.

Alejano’s office observed that the highest number of drug killings happened during the first two months of President Rodrigo Duterte term. Most of these happened in the Calabarzon region, Central Luzon, and Metro Manila.

However, they noted a declining trend in the conduct of drug operations towards September 2017.

“Noong simula nung pagkaupo ni Duterte, napakataas. But we can observe that the frequency declined after initial month of implementation of Tokhang,” Alejano said.

“The decline might have been because of the decline in Duterte’s trust rating, the public’s concern and reaction to the police’s conduct of operation, and public pressure,” he said.

As to the time of operation, the incidents, on an average, happened from midnight until 6 a.m.

Alejano said this could be because nighttime operations would provide concealment to cops targeting drug suspects.

“Or maybe the PNP purposely conducted the operations during these conspicuous hours to conceal their unlawful activities, to prevent people from becoming witnesses,” he said.

Alejano raised the possibility that cops might be using the same gun, a .38-caliber revolver, to plant as evidence in the drug war killings.

Based on the data, the weapons confiscated during drug operations were mostly .38-caliber revolvers with defaced serial numbers.

“This weapon is cheaper, more accessible to individuals, mas marami sa market,” Alejano said. “However, it’s important to note that as per spot reports, most weapons seized had unspecified or defaced serial numbers.”

One to six ‘shabu’ sachets

“What is more intriguing is that most of the cases that lead to death involves cases with one to six sachets of shabu only,” Alejano said.

Of the 1,671 killed, his analysis showed that at least 50 percent of them had only one to six sachets of shabu in their possession.

Like many critics of Duterte’s drug war, Alejano said the administration should see the proliferation of drugs in the country as a public health issue, thus prioritizing rehabilitation of drug users.

The opposition lawmaker reiterated that less than 10 percent of the population of drug users were addicts or heavy users.

“Bakit kina-catergorize mo sila na parang zombie na walang utak and they have to be killed?” Alejano said, referring to Duterte’s earlier statement saying that drug users were like zombies who have shrunken brains.

The International Criminal Court (ICC) in The Hague is set to start its preliminary examination on the government’s drug war.