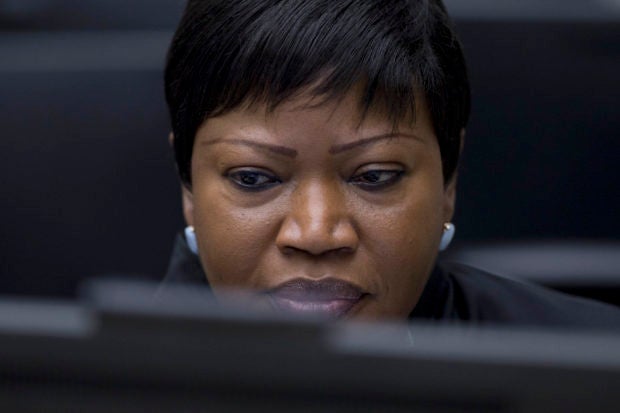 Malacañang on Thursday dismissed as a waste of time and resources the “preliminary examination” by the International Criminal Court (ICC) of a complaint that accused President Duterte of crimes against humanity in connection with extrajudicial killings (EJKs) in his war on drugs.

Presidential spokesperson Harry Roque told Palace reporters the Philippine mission in The Hague was informed that the Office of the Prosecutor of the ICC would start looking into “alleged acts associated with the campaign against illegal drugs covering the period of July 2016.”

Opposition lawmakers said the move offered a “ray of hope” to the families of thousands of victims of the drug war,  but was “damning and damaging” to the President.

The ICC was acting on the 77-page complaint filed by Jude Josue Sabio, a lawyer for confessed Davao Death Squad hit man Edgar Matobato, in April 2017 against Mr. Duterte and 11 senior officials that said crimes against humanity were being committed “repeatedly, unchangingly and continuously” and killing drug suspects and other criminals had become “best practice.”

“We view of course this decision of the prosecutor as a waste of the court’s time and resources,” Roque said.

He said he had discussed the issue “extensively” for two hours the previous night with the President.

“The President has said that he also welcomes this preliminary examination because he’s sick and tired of being accused of the commission of crimes against humanity,” said Roque, who taught international law at the UP College of Law.

“The President has said that if need be he will argue his case personally before the [ICC],” Roque said.

“He said he wants to be in court and put the prosecutor on the stand to ask, ‘Who prodded you to proceed to preliminary examination?’” he added.

Roque said the President suspected “domestic enemies of the state” meant to embarrass him.

“But the President is a lawyer, he knows what the procedures are. They will fail,” he said.

ICC Prosecutor Fatou Bensouda said she decided to open the preliminary examination after “a careful, independent and impartial review” of the situation in the Philippines.

The Philippine probe is the ICC’s first preliminary examination in a Southeast Asian nation.

Not above the law

Sen. Antonio Trillanes IV, one of the President’s archcritics, said the ICC’s move “should jolt Duterte into realizing that he is not above the law.”

“More importantly, this is the first step for the victims’ families quest for justice,” Trillanes said in a statement.

“The ICC, stepping in, is a ray of hope amid the compromised rule of law under this administration,” Magdalo Rep. Gary Alejano said.

In a statement, Sabio said he was “elated and vindicated” by the ICC action.

“At last, Mr. Duterte and his cohorts will face preliminary examination by the ICC prosecutor as a prelude to formal criminal investigation,” Sabio said.

“His system of death squad killings, which started through the Davao Death Squad and was continued on a national scale through the war on drugs, will now be investigated by the ICC and justice will be done,” he added.

Akbayan Rep. Tom Villarin said the ICC action “will be damning and damaging to his administration in the eyes of our people and the international community.”

Villarin said this would also provide the “opportunity to implead other enablers of [EJKs], including possibly presidential spokesman Harry Roque.”

Former Commission on Human Rights Chair Loretta Rosales said the preliminary examination was an important step in strengthening the rule of law and the beginning of a rigorous process to gather evidence before any trial.

“There is no room for politics in that process,” Rosales said. “Not for one moment should anyone use the ICC as a tool for propaganda and dealmaking.”

While saying that the President welcomed the investigation, Roque also demanded “complementarity,” which states that the ICC will only exercise jurisdiction if the state party of the accused is “unable or unwilling” to prosecute the crime.

“The President has made it clear that he will communicate, he will assert the principle of complimentarity, he will assert the legality of the war against drugs as a valid exercise of sovereign powers and therefore the element required for a crime against humanity is lacking,” Roque said.

Last December, Roque said it was possible that the Philippines may withdraw its membership from the ICC if it violated the principle of complementarity as three African states had done.

He said the ICC prosecutor’s action at this time was only intended to determine if there was reasonable basis to proceed with a formal investigation.

He said Manila would cooperate if the ICC prosecutor sought data on the drug war killings, adding that “the data alone will not prove anything.” —WITH REPORTS FROM CHRISTINE O. AVENDAÑO, DJ YAP, DONA PAZZIBUGAN