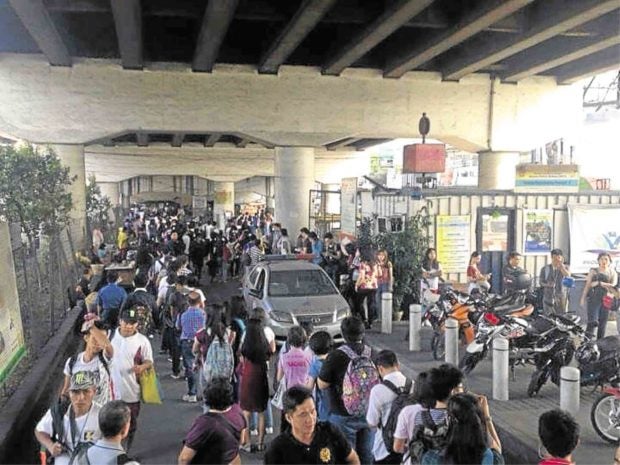 Long lines form due to lack of jeepneys at the UP-Katipunan Avenue transport terminal in Quezon City on Thursday. —Photo courtesy of Anakbayan UP Diliman

The government’s campaign against dilapidated and smoke-belching public vehicles targeted passenger jeepneys plying routes on the University of the Philippines Diliman campus in Quezon City, on Thursday, leaving a lot of students, teachers and personnel stranded.

Aileen Lizada, a board member of the Land Transportation Franchising and Regulatory Board and I-ACT spokesperson, said that violations were found in 97 jeepneys. A total of 22 failed the antismoke belching test while 20 were found to have defective parts.

On the other hand, 55 jeeps were found operating in violation of Republic Act 4136 or the Land Transportation and Traffic Code.

Affected UP students expressed frustration over the campaign on social media as they posted photos of long lines of passengers at jeepney terminals on Katipunan Avenue and near Philcoa on Commonwealth Avenue.

John Remil Isaga, a UP alumnus who stays in a boarding house on the campus, said that instead of 15 minutes, it took him twice as long to get to a Metro Rail Transit station.

This was after he managed to get a ride on one of the 10 solar-powered jeepneys provided by I-ACT to affected passengers.

“We were really cramped inside because we had no other option,” Isaga said. “Since we were overloaded, [the vehicle] was really slow compared to gas-powered jeeps and even had difficulty going over road humps.”

Architecture student Denver Fajanilan also had to walk from Barangay Krus na Ligas to get to class after he saw that there were no “Ikot” jeeps and long lines were forming at a jeepney stop.

University officials said that government agencies involved in the campaign did not coordinate with them.

“We don’t have buses and only a minority have cars or can afford Uber and taxis,” said UP Chancellor Michael Tan. “I think more students missed their classes because of this crackdown on jeeps than rallies and calls to boycott.”

UP Vice Chancellor for Community Affairs Nestor Castro said that the areas where the inspections were conducted were “national roads and therefore under the jurisdiction of the Metropolitan Manila Development Authority.”

Jeepney drivers, meanwhile, lamented the stiff penalties imposed by I-ACT, including a fine of P5,000 for first-time offenders.

Cesar Santa Maria, president of the UP Ikot Drivers and Operators Association, said they were not against the campaign but the penalties were too stiff.

“We also want to modernize but the way they want to implement the program, I think they are rushing it. It’s sad that they want to take away our livelihood,” he added.

Lizada, however, said that the operators should have fixed their vehicles a long time ago. “A P5,000 fine compared to the lives and safety of the passengers is not commensurate,” she stressed.