Duterte to labor leaders: No to abolition of ‘endo’ for now | Inquirer News

Duterte to labor leaders: No to abolition of ‘endo’ for now 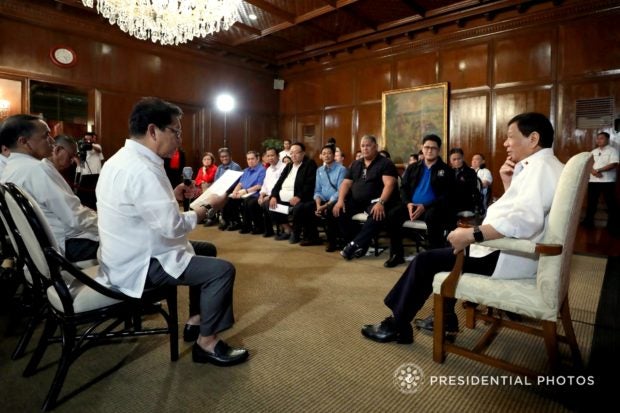 CONTRACTUALIZATION MEETING At a meeting in Malacañang on Wednesday, President Duterte asked labor leaders to give him until March 15 to study the proposed executive order on contractualization drafted by workers.—MALACAÑANG PHOTO

Ending contractualization is one of the campaign promises that President Duterte has yet to keep.

Mr. Duterte has asked for more time to study a  proposed executive order (EO) on contractualization on the ground that the order might turn off foreign investors, said labor leaders who met with him in Malacañang on Wednesday.

He has asked that he be given until March 15 to study the proposed EO, said Luis Manuel Corral, Trade Union Congress of the Philippines (TUCP) vice president.

“We are dismayed because we were expecting something more,” Corral told reporters. “[W]e reminded him about the dead-end for millions of workers relying on his promise.”

“We are worried it will be a watered down version of the EO,” Labog said of the final order that the President would sign.

The labor leaders said workers had expected Mr. Duterte to sign the EO during the dialogue.

Under the proposed EO, regular employment would  become the norm, while contractualization would be allowed only for some professions to be decided by the Department of Labor and Employment and its advisory council, the National Tripartite Industrial Peace Council.

The EO proposed by labor groups would prohibit contractualization if it contravened the rights of workers on security of tenure, union organizing and collective bargaining.

The proposed EO defines security of tenure as the direct hiring relationship between a principal employer and an employee.

Contractualization, which is being used by employers to avoid regularizing the employment status of their workers, offers workers no security of tenure.

The practice is rampant in the country.

“Endo” or end-of-contract is what trade unions refer to as a contractualization scheme that offers short-term and unprotected temporary work arrangements.

Endo workers, in particular, are bound by a five-month timeframe so that companies will not make them regular employees after six months as mandated by the Labor Code.

From this arrangement stems the 5-5-5 scheme in which workers are hired and fired every five months so that employers will not make them regular employees, who become entitled to various benefits and privileges after six months at work.

The department order listed down “prohibited” practices, such as contracting through an in-house agency and contracting work that is also done by regular employees.

Request for an EO

This prompted them to ask Mr. Duterte to issue an EO on contractualization.

Corral said there was room for contractualization for specific jobs and activities, which by their very nature are contractual.

The labor leaders said they had promptly and faithfully cooperated with the process of drafting the EO.

“He asked us on Labor Day last year to prepare a draft, which we did. We also engaged in several dialogues with DOLE to finalize the EO,” said a joint statement by Nagkaisa and KMU. “It is frustrating that we have been made to wait this long only to be rejected,” the statement added.

The labor groups said they would “hold bigger protests to put pressure on the President to sign our EO and to fulfill his promise of ending all forms of contractualization.”

“We were demanding an immediate implementation of a national minimum wage to increase the purchasing power of those outside of Metro Manila,” Labog said.