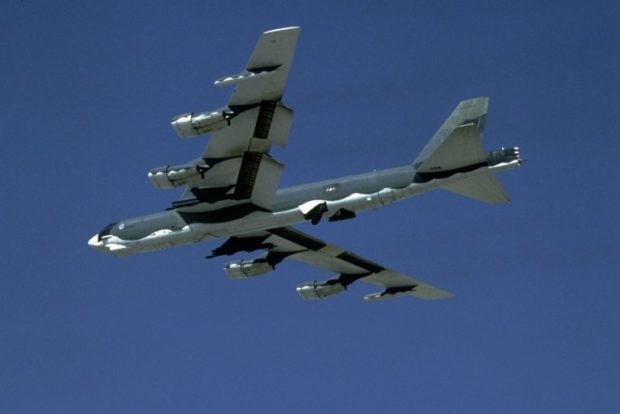 This undated US Air Force file photo shows a B-52 Stratofortresses in flight. The B-52 bomber is capable of carrying and launching cruise missiles with nuclear warheads. AFP FILE

Mattis told a hearing in Congress that Moscow is violating the Intermediate Nuclear Forces Treaty and Washington want to pressure it to get back in line.

“As you know, we have an ongoing issue with Russia’s violation of the INF. I want to make certain that our negotiators have something to negotiate with, that we want Russia back into compliance,” he told the House Armed Services Committee.

“We are going to stay inside the INF-compliant requirements but we are going to do research and development of an alternative weapon that should put Russia in a position to see the value to returning to being INF-compliant,” he said.

For several months Washington has accused Russia of developing a new intermediate-range, ground-launched cruise missile that violates the treaty signed by Ronald Reagan and Mikhail Gorbachev and implemented in 1988.

Last week the Pentagon released an updated nuclear strategy, the Nuclear Posture Review, that details how the US plans to face threats from North Korea, Iran and China, but mainly Russia.

The ballistic missile would not violate the INF, but the cruise missile, if developed over the next 7-10 years, would.

But Washington could hold off on it if Moscow falls back into compliance with the 30-year-old INF, according to Pentagon deputy director for strategic stability Greg Weaver. /cbb