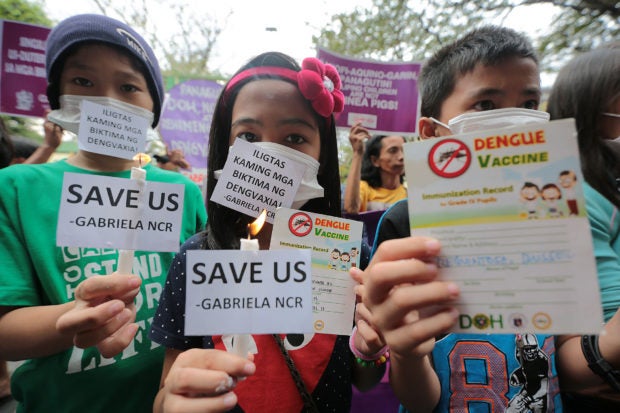 WORRIED KIDS Children who had received Dengvaxia shots join their parents and members of Gabriela at the Department of Health demanding assistance to those inoculated in the botched immunization program. —GRIG C. MONTEGRANDE

Is Erwin Erfe, the forensics chief of the Public Attorney’s Office (PAO), a pathology expert?

Both Malacañang and Health Secretary Francisco Duque III believe he is not, according to Justice Secretary Vitaliano Aguirre II.

Aguirre told reporters on Wednesday that any conclusion made by Erfe from the autopsies he had performed on children who allegedly died after they were inoculated with the dengue vaccine Dengvaxia, should not be regarded as an “expert opinion.”

Aguirre said he met with Duque and presidential spokesperson Harry Roque on Tuesday to discuss how the government should deal with the uproar over the botched P3.5-billion vaccination program of the Department of Health (DOH).

“I think we all agreed that Dr. Erfe is only a medicolegal officer. So his opinion, if he made an opinion, on the deaths [related to] Dengvaxia did not come from an expert,” Aguirre said in a press conference.

“I impressed upon the two, Duque and Roque, that there should be an opinion from a pathologist so that the opinion will be valid,” he said.

Aguirre said the government should hire a foreign pathology expert to ensure an independent examination of children whose deaths were blamed on the dengue vaccine.

The justice secretary, however, said he would not order PAO chief Persida Rueda-Acosta and Erfe to stop the investigation of the deaths of at least 14 children.

Acosta had defended Erfe, saying he had appropriate training and expertise in determining the cause of death through forensic examination.

Critics, including some doctors, had questioned Erfe’s authority and expertise in concluding that many of the children the PAO had examined died after they were vaccinated.

The DOH stopped the massive immunization program that had inoculated  830,000 children last Dec. 1 after the Dengvaxia manufacturer, Sanofi Pasteur, said the vaccine could cause severe dengue  in patients with no previous exposure to the mosquito-borne disease.

A panel of experts from state-run Philippine General Hospital (PGH)  reviewed the medical records of the 14 children who had all received Dengvaxia shots.

The experts said there was  “no causal association” to the inoculation in the three fatal cases as the children had died of dengue despite being vaccinated with Dengvaxia and there was vaccine failure in two of them.

The PGH experts recommended further studies by pathologists, especially of tissue samples from the children.

They said the PAO had not cooperated with the panel, which Duque had confirmed to reporters who spoke with him after his confirmation hearing on Wednesday.

Duque said Health Undersecretary Eric Domingo had written the PAO several times but Acosta had not responded to them.

Duque also said there was “no basis” to declare the Dengvaxia fiasco a national emergency, which the Volunteers Against Crime and Corruption had requested President Duterte to do.

PAO autopsies to go on

“The Palace as well as the DOJ (Department of Justice) were in agreement that the exhumation of the [bodies] and examination will continue until we have decided that the same be stopped,” he said.

On Wednesday, a PAO forensic team exhumed the body of Erico Leabres—a 10-year-old boy who was inoculated with Dengvaxia in 2016—at the request of his parents, Philip and Leny Leabres.

According to his mother, the boy, her youngest child, was healthy before he got the antidengue shot in May 2016. She said his older brother was also vaccinated but only he had fallen ill.

She said her son was hospitalized in June 2016 for high fever and nosebleed. He was in and out of the hospital from July until his death in August, she said. —With reports from Christine O. Avendaño and Armand Galang