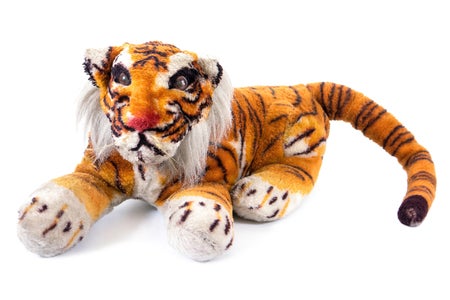 One man was so worried that an “animal” got on the loose, he did not realize that it was fake all along.

A 45-minute stand-off ensued between police and what was supposedly a tiger, which turned out to be a stuffed toy, The Scottish Sun first reported on Monday.

The fiasco started when 24-year-old Bruce Grubb saw the “tiger” lurking on his farm in Peterhead, Scotland on Saturday night. He had invited friends to his place for a housewarming party.

Upon seeing the tiger, he immediately checked on his 200 pregnant cows and called in reinforcements. “I was on duty because the cows could drop at any time so I wasn’t drinking. I flashed my torch in the shed and saw it sitting there.”

“I got the fright of my life,” Grubb said in the interview, recalling what had happened. Only then did he become suspicious when the tiger did not make a single move, while police were in their vehicles planning how to proceed.

“I had absolutely no doubt it was real — I got a hell of a scare. I was worried it was going to eat all my cows before police managed to shoot it.” Grubb added.

Grubb even said that one police officer “refused to get out of the squad car or even wind the windows down. He didn’t even want to go near it because he thought it was real.” Only when the farm owner took a closer look at the tiger did he realize his mistake.

The police later decided to keep the stuffed animal as mascot.

Scotland’s North East Police Division also owned up to their mistake, but said in its Facebook post that they treated the matter seriously as it posed “potential danger to the public.”

In the end, Grubb admitted to “feel a bit silly” about what happened, but maintained “I was stone cold sober, drink had nothing to do with me thinking it was real.” Katrina Hallare/JB