Sanofi: No to full reimbursement 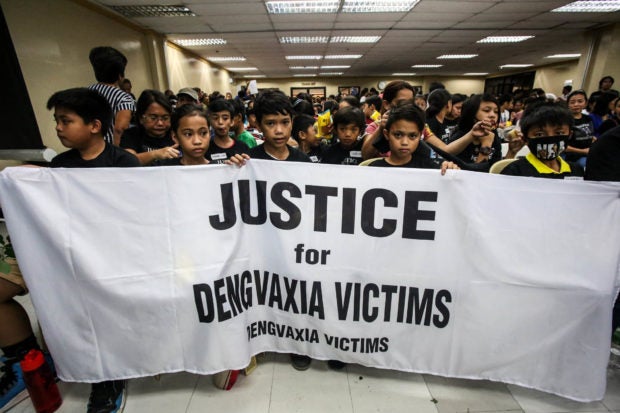 FIRST CASE Children inoculated with Dengvaxia gather with their parents at the PAO office in Quezon City on Monday in preparation for the filing of the first case against Sanofi Pasteur over the dengue vaccine controversy. —JAM STA. ROSA

French pharmaceutical giant Sanofi Pasteur on Monday rejected the Department of Health’s (DOH) demand that it refund the cost of used doses of Dengvaxia and set up an indemnity fund to finance the hospitalization of children who would come down sick after being inoculated with the dengue vaccine.

During a hearing called by the House of Representatives’ good government and health committees, Thomas Triomphe, the Asia-Pacific head of Sanofi Pasteur, said complying with the DOH’s demand would “imply the product is ineffective [and] does not provide the effect provided, which is not the case.”

“Doing so will create confusion in the mind of the population of the parents of the kids immunized. We’ll give the impression of the inefficacy of the product,” Triomphe told lawmakers.

Asked by Surigao del Sur Rep. Johnny Pimentel, chair of the good government committee, if the DOH would pursue legal options against Sanofi Pasteur, Health Secretary Francisco Duque III said: “It’s an option, but we will look at other available ones.”

The DOH halted a P3.5-billion dengue immunization program using Dengvaxia last Dec. 1 after Sanofi Pasteur announced new analysis that showed the vaccine worsened symptoms in vaccinated people who had no previous exposure to the dengue virus.

More than 380,000 schoolchildren had been given at least one dose of Dengvaxia before the DOH could halt the program.

“We did so to show our continued commitment to cooperate with the Department of Health in ensuring the best possible health outcomes for the people of the Philippines,” the company said in a statement on Monday.

No payment for used doses

But Sanofi said it would not pay for doses that were already used because doing so would imply that Dengvaxia was ineffective.

The company also rejected a separate DOH request to set up an indemnification fund to cover the hospitalization and treatment of vaccinated children who would contract dengue.

“Should there be any case of injury due to dengue that has been demonstrated by credible scientific evidence to be causally related to vaccination, we will assume responsibility,” the company said.

Malacañang said Sanofi Pasteur was “not yet off the hook.”

Presidential spokesperson Harry Roque said the government would seek damages from the French company if it were shown to have deliberately hidden Dengvaxia’s side effects.

“They must be dreaming if they think they’re off the hook. We are just letting [the National Bureau of Investigation] finish the investigation,” Roque said at a press briefing.

“Dream on, Sanofi. If it were proven that they knew the side effect but they did not disclose, they could pay a large amount in damages, not just the full reimbursement,” he said.

Administration allies Representatives Robert Ace Barbers of Surigao del Norte and Rodel Batocabe of Ako Bicol called on the DOH to blacklist Sanofi Pasteur so it would be banned from doing business with the government.

Triomphe maintained the vaccine had a 93.2-percent efficacy rate and said “using Dengvaxia in the Philippines and other endemic countries will ensure there are less [dengue] cases than not using Dengvaxia.”

He also pointed out that other dengue-endemic countries have continued to use Dengvaxia despite the controversy in the Philippines.

No direct link to deaths

While state-run Philippine General Hospital (PGH) announced last week that three of 14 examined deaths could have “causal association” with the vaccine, Triomphe stressed: “Up to date, there is no direct evidence linking Dengvaxia to any of those reported deaths.”

He emphasized that “no vaccine is 100-percent efficacious.” The reported occurrence of a few deaths remained “very well aligned with our own conclusions,” he said, since 830,000 schoolchildren have been immunized under the program that began in April 2016.

The pharmaceutical giant maintains that the vaccine is still effective in protecting seropositive recipients, or those who had prior exposure to the dengue virus, against future infections.

Triomphe stuck to that assurance during the hearing, saying an estimated 90 percent of the population in the country’s dengue-endemic areas were seropositive.

He admitted, however, that “there is no easily available rapid diagnostic test” to check if a child is seropositive.

When Rep. Angelina Tan, the health committee chair who is also a doctor, asked if the vaccine could be recommended for use despite this fact, Triomphe simply replied: “Sanofi does not make public health recommendations.”

Health Undersecretary Rolando Enrique Domingo said further studies had to be conducted before Sanofi Pasteur could be held liable for criminal offenses.

“What we’re doing now is we want to complete the investigation first. We need some more tissue samples. So, this can really give more solid and definitive findings, before we file cases,” Domingo said, adding the PGH is also trying to secure the samples and autopsy results of the Public Attorney’s Office (PAO).

The PAO has been conducting autopsies on the bodies of children who died allegedly after receiving Dengvaxia.

Lawmakers and health experts, including former Health Secretary Esperanza Cabral, have called for a stop to the PAO autopsies, saying the examination should be left to pathologists.

Justice Secretary Vitaliano Aguirre II on Monday refused to stop the PAO autopsies, but said Cabral and the Doctors for Public Welfare could submit their opinion on the Dengvaxia controversy.

The PAO is filing a civil suit on Tuesday against officials of Sanofi Pasteur, officials of Zuellig Pharma (Sanofi Pasteur’s local distributor), former Health Secretary Janette Garin and former Health Undersecretary Kenneth Hartigan Go on behalf of the family of 10-year-old Angielica Pestilos of Quezon City, who died last December, months after being given Dengvaxia.

They are seeking P4.1 million in damages against the respondents.

The Volunteers Against Crime and Corruption is filing an administrative suit in the Office of the President on Tuesday against those who spearheaded the immunization program using Dengvaxia.

The angry mothers of some children who had been given Dengvaxia confronted Garin after the hearing at the House.

Wearing black shirts emblazoned with the words “Justice for Dengvaxia victims,” the mothers complained about the sufferings their children were going through after being inoculated with Dengvaxia.

One of them was Felicitas Asembrado of Zamboanga City, 53, who complained that her 11-year-old son had been experiencing stomach pain, fever, headache and joint pains.