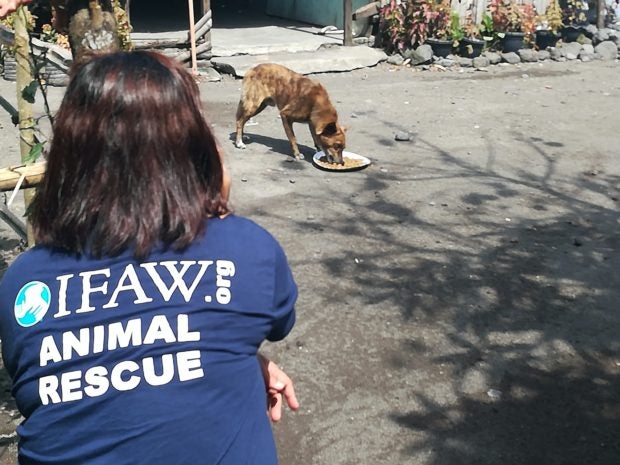 FOOD FOR ABANDONED PETS One of the dogs that owners have left in Mt. Mayon’s danger zone gets food from animal welfare groups and the Albay provincial veterinary services. —PHOTO BY ROCKY ROGER LOZAÑES/PROVINCIAL VETERINARY OFFICE

A number of the pets are still chained in the yards of families that evacuated to public schools in the province.

With sacks of dog food that they mixed with canned goods, the groups fed the abandoned pets, particularly dogs in Guinobatan’s villages of Muladbucad Pequeño, Muladbucad Grande, Masarawag and Doña Tomasa.

A total of 1,029 dogs have been fed since Sunday, according to Florencio Adonay, the provincial veterinarian.

“Most of the pets [that] we have given palatable dog food mixed with canned goods were very hungry and have lost weight,” Adonay said.

Some of the dogs, he said, are still chained or tied in yards.

In times of disasters, the protocol is to free dogs to allow them to run away from harm but the owners have forgotten this procedure in their haste to leave.

Adonay said feeding the dogs was part of Mayon disaster operations and would last for two weeks.

Farm animals like cows, carabaos and goats were also evacuated to safe places. They were given concentrates, feeds high in energy value and protein.

“We established pooling places for these animals to keep them from harm’s way,” the provincial veterinarian said.

Like humans, animals are affected by the volcanic ash that Mayon has been spewing since last month.

Adonay said ash inhalation might cause pneumonia, other respiratory illnesses and even death among animals.

The animals may even suffer from skin rashes and wounds due to volcanic ash.

Adonay said in an earlier interview that the province had organized several teams to transfer all affected animals in the designated pooling areas outside the 7-km radius.

Evacuated were farm animals in Ligao City and in the towns of Camalig, Daraga and Guinobatan.

“The grass they eat with ashes have toxic chemicals that would affect the digestive system and blood circulation,” Adonay said.

Should a major eruption happen, more than 6,000 animals could be moved to strategic pooling areas the teams have positioned in the towns of Camalig, Daraga, Guinobatan, Santo Domingo, Malilipot and cities of Legazpi, Ligao and Tabaco.

Lava discharge from Mayon has not changed, according to the Philippine Institute of Volcanology and Seismology (Phivolcs).

Ed Laguerta, resident volcanologist at the Mayon Volcano Observatory, said on Sunday that Phivolcs would not lower Alert Level 4 (hazardous eruption imminent) as long as the country’s most active volcano was spewing lava and its edifice was still inflated.

He said the moment Mayon showed low activity, Phivolcs would still have to observe the volcano for two more weeks before it could lower the alert level.

“There is a two-week window so we can see if the trend is uninterrupted,” Laguerta said.

This, he said, is to help local governments in deciding whether to keep the residents in evacuation centers. —With a report from Ma. April Mier