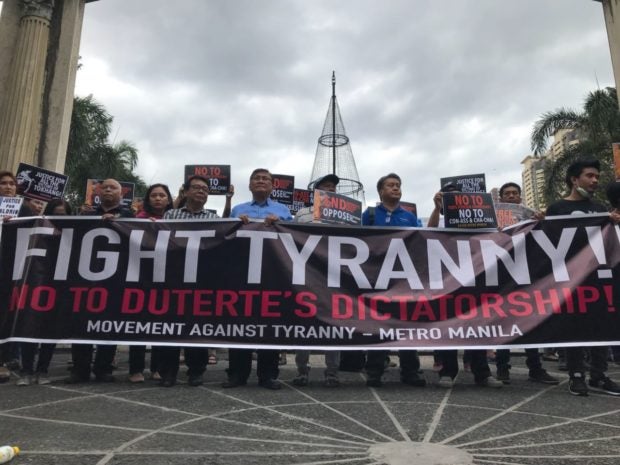 Militant groups have vowed to continue staging anti-government protests in the face of President Rodrigo Duterte’s threat to go after “legal fronts” of the Communist Party of the Philippines (CPP).

Duterte told reporters in Davao City on January 26, the day of his return from a trip to India, that he would go after left-wing organizations, adding that he ordered a crackdown against “enemies of the state.”

Amira Lidasan, spokeswoman for the newly-launched Movement Against Tyranny (MAT) Metro Manila, said Duterte’s threats of a “political crackdown” demonstrated the “dictatorial and tyrannical rule” of his administration.

The movement consists of activist groups and organizations such as the National Union of Peoples’ Lawyers, National Union of Students of the Philippines, Bayan Muna, Anakbayan and Kabataan Partylist, among others.

“President Duterte seems to be disillusioned in thinking that he can silence the growing dissent and clamor against his tyrannical and dictatorial rule by implementing his iron fist on the people,” Lidasan said

“This government cannot bow us down as we remain unfazed and determined to oppose Duterte’s draconian and Marcosian style of leadership. He must brace himself for more and growing series of protests and mass actions in the days to come,” Lidasan said. /jpv