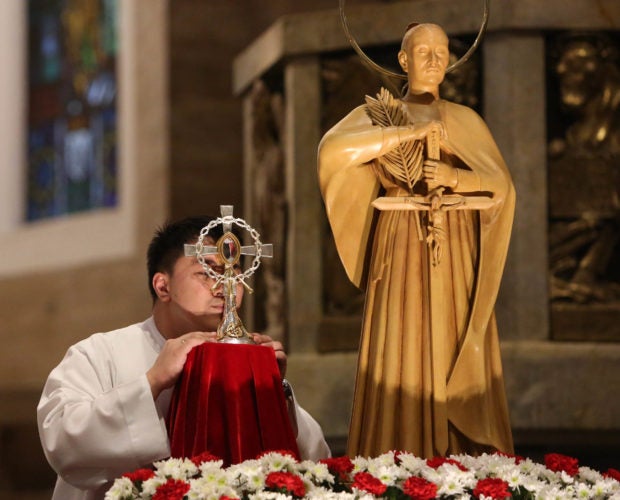 The relics of Blessed Takayama Ukon is kissed by Manila Cathedral vice rector Fr. Kali Llmado during his Feast day on February 3. Takayama is a japanese Samurai who turned his back as a warrior to devote his life to Christianity, and in 1614 he was exiled in Manila where he lived a life of holiness until his death. INQUIRER/MARIANNE BERMUDEZ

Be martyrs for the Catholic every day by giving yourself to others and finding meaning in suffering.

Manila Archbishop Luis Antonio Cardinal Tagle urged the faithful to emulate Blessed Justo Takayama Ukon, a Japanese Christian who was persecuted for his faith and died in exile here.

The prelate cited the example of Blessed Takayama, a Japanese samurai who was persecuted for being a Christian and had to flee to the Philippines in 1614.

But in these modern times, Tagle pointed out that one “does not have to wait for martyrdoom” and that Catholics “are invited to be martyrs every day.”

“Every day, we are asked by Jesus to be with Him, to be witnesses to His love. So give yourself to others and be united with them in their suffering,” Tagle said.

Tagle made the remarks in his homily during a Mass for the first feast day of Blessed Takayama, held at the Manila Cathedral on Saturday.

Blessed Takayama was a Japanese samurai and feudal lord who lived during the Warring States period in Japan, and was baptized as a Catholic with the name, Justo, when he was only 12.

In 1587, Christians were ordered expelled from Japan and all Christian feudal lords asked to renounce their faith.

Refusing to give up his faith, Blessed Takayama lived under the protection of his allies.

He was eventually forced to leave his homeland, arriving in Manila in December 1614 and warmly welcomed by the Spanish Jesuits and Filipino Christians.

However, he died of illness in February 1615, or after 40 days of exile in the Philippines.

Saturday’s Mass was concelebrated with six bishops from Japan, and attended by both Filipino Catholics and Japanese pilgrims who came to Manila to venerate Blessed Takayama’s relics.

In his homily, Tagle cited Blessed Takayama’s life, especially his choice to remain true to his faith even if he had a chance to save himself by simply renouncing it.

“He knew the dangers, he was given a chance to turn away from Jesus and his faith. But he remained faithful to Jesus. Others said he was crazy for not saving his life,” the prelate said.

But in today’s times, Blessed Takayama’s “foolishness” is now a source of wisdom and strength for Catholics, Tagle said.

The prelate added that the Christian understanding of suffering is to give life to others in an ultimate act of love.

“It is not looking for suffering because we enjoy it. It is love, it is mission, it is a gift of self that gives someone like Jesus the strength to suffer and die. With love, you can suffer meaningfully and in a manner that gives life to others,” Tagle said.

Tagle added: “Have no fear, love and when you love you will have the strength to suffer. People who love but are afraid of suffering do not know how to love.”