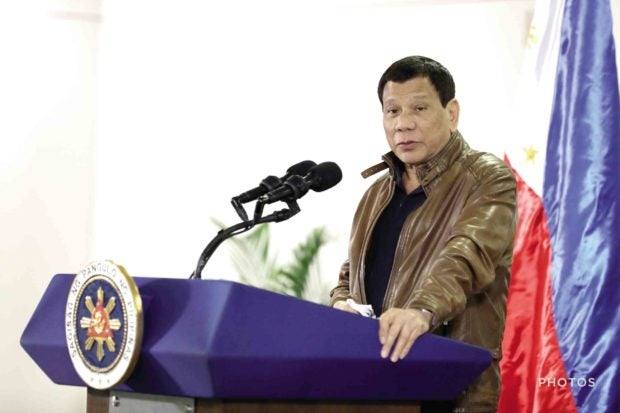 After declaring the Communist Party of the Philippines (CPP) and the New People’s Army (NPA) as  terrorist groups, President Rodrigo Duterte on Saturday said he would go after left-wing organizations, accusing them of being communist fronts.

Speaking to reporters in Davao City after his return from his trip to India, Mr. Duterte reiterated his order to destroy the apparatus of the communist rebellion, saying the peace talks were over.

“I will go after the legal fronts,” he said, referring to groups with alleged ties to the communist underground.

He said these groups were involved in illegal activities like collecting taxes for the rebels and he had long known that they have been supporting the insurgency.

The President said he was just waiting for the decision of the Supreme Court on his proclamation declaring the CPP and its armed wing, the NPA, as terrorists.

Mr. Duterte said the “enemies of the state” could expect the full force of the government because “my orders are really to destroy, to destroy the apparatus.”

“We fear for intensified military operations in the rural communities especially those with active local mass struggles,” Pamalakaya chair Fernando Hicap said in a statement.

Hicap said the President’s order showed that a dictatorship and “open fascist rule” were emerging.

Destroying the communist apparatus meant that “everything, all legal (fronts)” would now be targeted,  Mr. Duterte said.

He said the NPA had been fooling members of the indigenous communities where it had been operating all these years, and he questioned the reasons people were joining the rebel movement.

“You die there, separated from your families … but what did you get in return? Money?” he said.

He said he would cancel the permits of big companies, particularly those involved in banana exports and mining, which were continuing to pay revolutionary taxes to the NPA. He said he would look into their involvement in money laundering.

“If I will catch you, I will give you a hell of a time. Maybe especially those in mining, I’ll just cancel your (permits). You were the ones who gave the largest (amounts),” he said.

“You are funding an organization, which is bent on destroying my country, our country,” he added.

He said his order to the military “to crush” the insurgency meant to destroy it.

“And if you have to kill, do it because the human rights (groups), if our country falls apart, they would not help,” he said.

Responding to the President’s statements, CPP founding chair Jose Maria Sison said leftist groups “are not at all frightened by threats and acts of military and police suppression by any regime, be it that of Marcos or Duterte.”

“Instead, they become challenged and become even more resolute and militant in struggle and become stronger in the process,” he said in an online interview from the Netherlands, where he has lived in exile since 1987.

Sison said Mr. Duterte was wrong in saying “sweepingly” that all left-wing groups were communists or communist fronts.

He said leftist and progressive groups “include people from various walks of life and represent different schools or currents of thought and belief.”

Sison recalled that when Kabataang Makabayan, the youth group that he founded in the 1960s, and other legal mass organizations went underground because of the Marcos dictatorship, they helped to spread the CPP and the NPA nationwide and made them stronger.