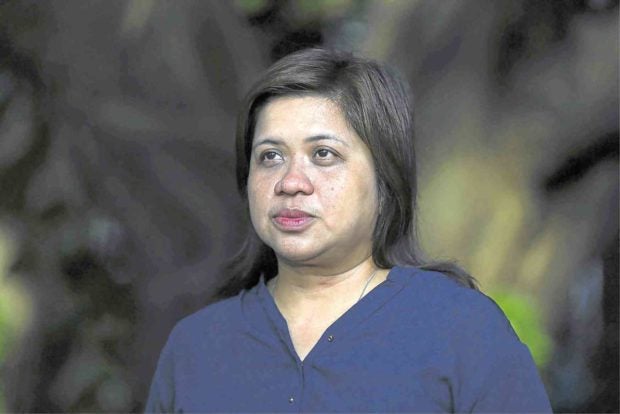 Jover Laurio, the person behind the popular Pinoy Ako Blog (PAB), was moved to a safehouse with a security detail on Wednesday night, following a suspicious incident involving an unidentified man who had gone to her house.

Laurio—voted as one of Inquirer’s 2017 Filipinos of the Year—initially posted her concern on her Facebook page, after which she blogged about the incident in detail.

On the morning of Jan. 31, Laurio recounted that she was upstairs in the apartment she was renting with her mother and was being interviewed on the phone for a radio show anchored by lawyers Jesus Falcis and Bruce Rivera, when a man came knocking at their gate.

The man identified himself to her mother as being from a telecommunications company, and said that he wanted to check the mobile network’s signal in that area.

But the man’s next questions raised suspicion about his real intention, Laurio said.

“Does Laurio live in the house?  For how long?  How many other people live there? Is she married?” were some of the questions the man had asked Laurio’s mother.

Before leaving, the man took photos of the apartment.

Her mother had not asked for the man’s identification, said Laurio, who contacted  the  telco company to report the incident.  She later received a call from the mobile network’s staff, who said there was no such assignment among their field technicians, and that these technicians don’t ask those kinds of questions.

Laurio told the Inquirer that though she had gotten used to online threats and bullying by her detractors, she felt apprehensive about the incident that she reported it to the police on the same day.

A friend who works at the Commission on Human Rights later advised her to move to a new place.

“That’s what we call ‘profiling.’ Next is liquidation,” the friend said of the incident.

Her friends wasted no time moving Laurio to a temporary safehouse.

Asked how she was doing, Laurio on Thursday said she was bored, but also glad that she could communicate with her mother by phone.

“May konti pang takot (There’s still a bit of fear), not for myself, but for my family,” Laurio said on her blog. “May takot pero patuloy na lalaban para sa katotohanan at sa bayan (There’s fear but the fight continues for the truth and for country).”

Laurio—whose PAB blog has some 150,000 followers and who has as many followers on Facebook—gained national attention when rabid supporters of President Duterte exposed her name, photos and personal details on social media, prompting trolls and Duterte’s propagandists to bully and threaten her.

She has filed criminal and civil cases against some of these bashers.

Laurio attracted more attention after a Duterte propagandist admonished BBC Southeast Asia correspondent Jonathan Head during the Asean Summit and complained bitterly about being ignored by BBC. The propagandist-blogger railed that BBC had chosen to interview “minor blogger” Laurio instead.

A pool of editors voted Laurio and other voices against fake news as the Inquirer’s 2017 Filipinos of the Year.

On Jan. 31, Laurio was among the resource persons invited to the Senate hearing on fake news.