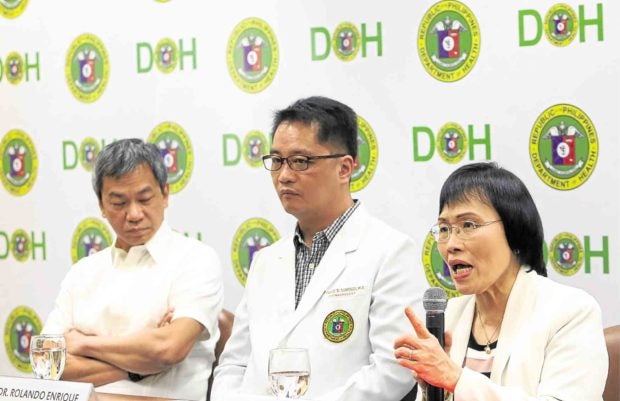 Department of Health (DOH) officials on Friday said they were looking at a possible vaccine failure in the case of two of three children who had received Dengvaxia shots and later died of dengue shock syndrome.

According to a clinical review conducted by experts from the Philippine General Hospital (PGH) on the case of 14 children who had been vaccinated and had died, only three had contracted the dengue virus.

“There is vaccine failure in two of the cases, but not for the 830,000 children who were given Dengvaxia. It’s a vaccine failure for these particular cases,” Health Undersecretary Enrique Domingo said in a news conference to disclose the results of the PGH study.

Domingo said there was “causal association” to the inoculation in the three fatal cases as the children had died of dengue despite being vaccinated with Dengvaxia.

He said the results of the study strengthened the decision of the DOH to suspend the P3.5-billion dengue immunization program.

“Dengvaxia is not fit for a mass immunization program that does not screen for prior dengue infection and comorbidities of children before the administration of the vaccine,” Domingo said.

The government halted the massive immunization program last year after Dengvaxia maker Sanofi Pasteur said a study showed the vaccine could increase the risks of dengue in people vaccinated prior to infection.

“This issue continues to sow fear and confusion, especially [among] the parents of children who have been injected with Dengvaxia,” the DOH said in a statement. “We aim to give clarity on the issues with an honest and objective reporting of the evidence and science.”

Dr. Juliet Sio-Aguilar, a pediatrician and head of the PGH expert panel, said they could not say for sure whether Dengvaxia was indeed the culprit in the three deaths, “but we can say that they contracted dengue, the wild type.”

“All of them succumbed to the dengue wild-type virus, which is the regular strain,” she said, adding that tissue evaluation would still be needed for these three children.

“Out of the 14, only three had dengue, one of them had antibodies and protection. We want to find out why it happened,” she added.

The DOH had forwarded the clinical records of the 14 children to the PGH for review to find out if there was any correlation between the controversial vaccine and the deaths.

Aguilar said two of the three children who died had received all three doses of the vaccine while the third only got the first dose, falling ill only four days after getting the shot and dying five days after the onset of the disease.

Aguilar said these were the cases where vaccine failure was suspected.

In this case, it could not be ascertained yet if the third case was also due to vaccine failure or because of another cause, Aguilar said.

And despite being given Dengvaxia, two of the children did not develop any dengue antibodies while one developed dengue antibodies, which were supposed to serve as protection against dengue.

All of them tested positive for the NS1 dengue antigen, or the presence of dengue.

“We really want to know what happened. The third case developed antibodies, protection against dengue, but the child still died,” Aguilar said.

The study has determined that the 11 other children did not die of dengue but of other illnesses, including congenital heart disease, brain infection, pontine hemorrhage and cardiac arrhythmia.

The 10-man dengue investigative task force of the PGH reviewed each case three times before meeting to discuss their findings, Aguilar said.

The results of the two-week study would be submitted to the Department of Justice.

Domingo thanked the PGH expert panel for handling the investigation beyond their expectations.

“We appreciate the transparency and the tediousness as to how the 10 specialists from different fields conducted their study. We can only trust scientific evidence, and we were surprised at how scientific and thorough it was,” he said.

In selecting the members of the panel, the PGH made sure they had no connection to Sanofi and had not prescribed or given the Dengvaxia vaccine to their patients.