Oops: Guests invited to Trump’s State of the ‘Uniom’ 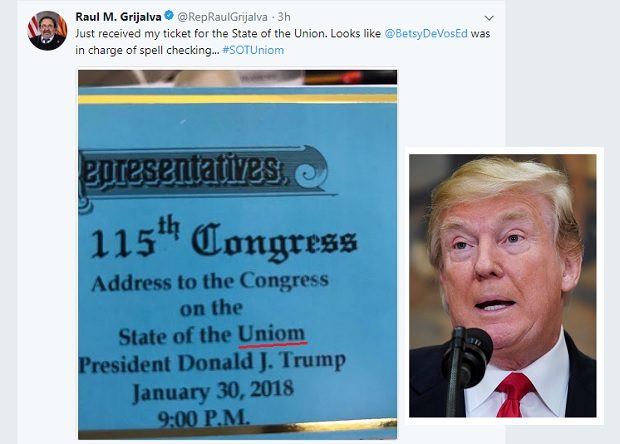 Reflecting the ‘covfefe’ of US President Donald Trump (inset, right), the invitation to his State of the Union Address on Jan. 30, 2018, suffered a hiccup when the printers wrote ‘Uniom’ instead of ‘Union.’ SCREENGRAB FROM @REPRAULGRIJALVA TWITTER PAGE

WASHINGTON, United States — Donald Trump’s misspellings have become legendary — “covfefe,” anyone? — but a glaring typo on tickets for the president’s State of the Union speech Tuesday has some lawmakers crying for spell check.

Tickets to the prime-time speech before a joint session of Congress were printed inviting lawmakers and guests to the State of the “Uniom,” lawmakers and officials said Monday.

“Just received my ticket for the State of the Union. Looks like @BetsyDeVosED was in charge of spell checking… #SOTUniom,” tweeted House Democrat Raul Grijalva, referring to Education Secretary Betsy DeVos, who has advocated policies that critics say undermine the public education system.

Grijalva’s tweet also included a photograph of the offending ticket.

The White House is not responsible for the error. The printing is overseen by the Sergeant at Arms of the US House of Representatives, whose office on Monday acknowledged the snafu.

“There was a misprint on the ticket,” a Sergeant at Arms spokesman told AFP.

“It was corrected immediately, and our office is redistributing the tickets.”

But not before a few lawmakers got some ribbing in.

On the spelling front, Trump has been a presidential trailblazer. He has routinely posted tweets containing errors, including one on the day after his January 20, 2017 inauguration, in which he wrote he was “honered to serve” as the nation’s 45th president. /cbb