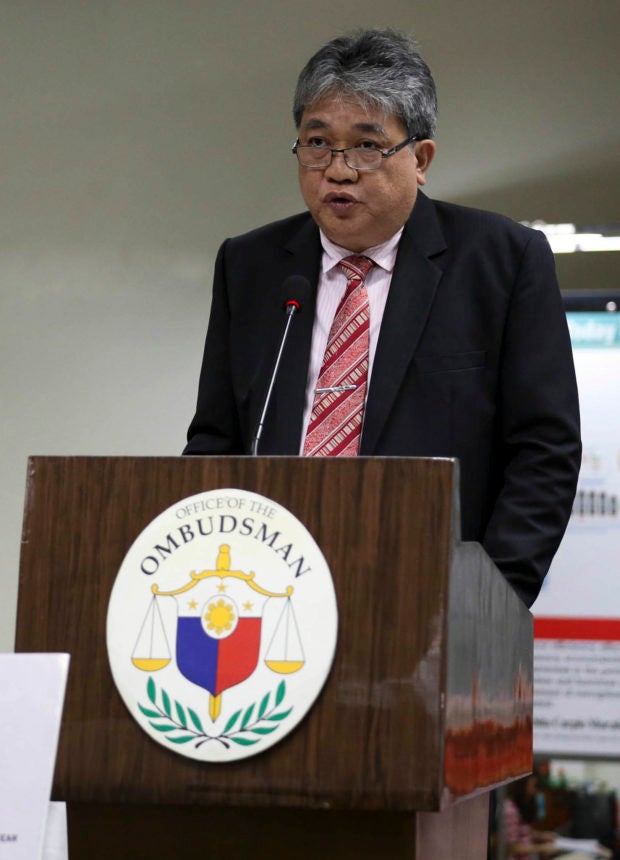 The Palace said it had the power to discipline Carandang.

Presidential spokesperson Harry Roque said the Palace was confident that the Supreme Court would “revisit” its decision in 2014 that the Office of the President (OP) had “no power of discipline over the Office of the Deputy Ombudsman.”

“The OP wants to revisit that ruling. OP is confident it can reverse anew,” Roque said in a text message.

He said the Office of the Executive Secretary on Friday found that there was probable cause to charge Carandang with three administrative offenses in the OP and to put him under preventive suspension for 90 days.

“He (Carandang) was now made to answer [within 10 days],” Roque said in a press briefing.

Sen. Antonio Trillanes IV, who released the bank records of Mr. Duterte during the presidential campaign in 2016, said Malacañang’s move against Carandang was an “impeachable offense.”

In a statement, Trillanes said the move violated Section 5 of Article XI of the 1987 Constitution, “which clearly states the independence of the Office of the Ombudsman and its Deputies.”

The senator said the Supreme Court had already resolved this matter. “Clearly, this is another Duterte tactic that’s meant to bully democratic institutions into submission so he could go on with his dictatorial and corrupt ways.”

Carandang started an investigation of the Duterte family’s alleged illegal wealth based on a complaint filed by Trillanes.

Ombudsman Conchita Carpio Morales has inhibited herself from the inquiry, as Mr. Duterte’s daughter Sara is married to her nephew.

According to Roque, Carandang’s alleged offenses include:

Violation of Section 3-E of Republic Act No. 3019 for causing any undue injury to any party, including the government, or giving any private party any unwarranted benefits, advantage of preference in the discharge of his official administrative or judicial function through manifest partiality, evident bad faith or gross inexcusable negligence.

Violation of 3-K of (the Anti-Graft and Corrupt Practices Act) in relation to Section 2 Rule 5 of OMB Administrative Order No. 7 for divulging valuable information of confidential character acquired by his office or by him on account of his official position to unauthorized persons or releasing such information in advance for its authorized release date.

Roque said the charges stemmed from the complaint filed by lawyers Manolito R. Luna and Elijio P. Mallari, who accused Carandang of trying to destabilize the Duterte administration.

Roque noted that Carandang had claimed that the Office of the Ombudsman received bank transaction records from the Anti-Money Laundering Council (AMLC) concerning the President’s supposed bank accounts.

He added that Carandang had also claimed that, when the transactions were added up, it could reach over P1 billion.

But the AMLC issued a statement saying Carandang had asked it to investigate Mr. Duterte’s supposed bank accounts but it had yet to evaluate the request or start any investigation.

“It has neither provided the Office of the Ombudsman with any report as a consequence of any investigation of subject accounts for any purpose,” Roque quoted the AMLC as saying.

He said the AMLC also pointed out that the alleged bank transactions representing outflows and inflows were added together, thus the resulting total amounts were wrong and misleading.

Roque also noted that the AMLC had clarified that the documents used by Trillanes in his plunder complaint filed against Mr. Duterte in the Office of the Ombudsman during the 2016 presidential campaign did not come from the council.

Carandang said the details in the documents that Trillanes made public during the 2016 campaign were “more or less” the same as the bank transaction history records the Office of the Ombudsman had received from the AMLC.

But Carandang said these records were used by the AMLC and the Ombudsman for intelligence-sharing purposes.

Carandang reiterated that the AMLC had yet to furnish the Ombudsman a copy of its own report on the allegation that Mr. Duterte and members of his family had accumulated unexplained wealth.

He also said the Office of the Ombudsman had always “observed confidentiality” in its investigation of Trillanes’ complaint.

Documents that Trillanes furnished the media in 2016 showed that from 2006 to 2015, Mr. Duterte held seven joint accounts with his daughter, Sara, at the Bank of the Philippine Islands (BPI) branch on Julia Vargas Avenue in Pasig City, nine joint accounts at the BPI Edsa Greenhills branch and one joint account at Banco de Oro Unibank-1 in Davao City.

Mr. Duterte, according to Trillanes, did not declare at least P227 million in his 2014 statement of assets, liabilities and net worth (SALN).

Mr. Duterte initially denied the existence of the bank account at the BPI branch on Julia Vargas Avenue in Pasig but later admitted that it had less than P200 million.

He also said that he did not declare the big amount in his SALN in 2014 because he had already spent it. —With reports from Christine O. Avendaño and Inquirer Research