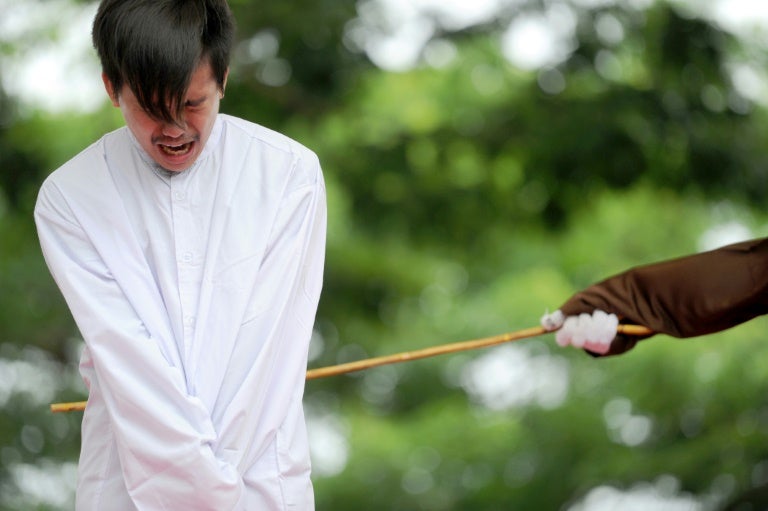 One of two Indonesian men is publicly caned for having gay sex in Aceh in May last year. Police in the province have now forcibly cut the hair of a group of transgender women. Image: Chaideer Mahyuddin / AFP

Indonesian police forcibly cut the hair of a group of transgender women and made them wear male clothing, authorities said Monday, amid a crackdown on the LGBT community in the world’s biggest Muslim-majority nation.

The incident happened after police on Sunday raided several beauty salons in conservative Aceh province and rounded up a dozen transgender employees over claims they had teased a group of boys.

Police accused the employees of violating the province’s religious laws.

Dozens of locals tried to attack the group of beauticians as they were hauled off to the police station, but they were pushed back by authorities, they said.

Police then lopped off some members’ long hair with scissors as well as forcing the group to wear male clothing and speak in a masculine voice.

“We have reports from mothers that their sons were teased by the transgender women,” local police chief Ahmad Untung Surianata told AFP Monday.

“Their numbers are growing here — I don’t want that,” he added.

Aceh on Sumatra island has been ruled by Islamic law since it was granted special autonomy in 2001 — an attempt by the central government to quell a long-running separatist insurgency.

This month a Christian was publicly flogged for selling alcohol in the conservative region, making him only the third non-Muslim in Indonesia to suffer a public whipping.

Flogging is a common punishment under Aceh’s religious law and local police are also known to shave the heads of those accused of anti-social behavior.

The transgender women would be detained for several days followed by a five-day “training” regimen including efforts to make them walk and speak in a more “manly” way, as well as “morals teaching” by local clerics, police said.

“We want to change their mentality so they can be better people,” Surianata said.

Homosexuality and gay sex are legal everywhere in Indonesia except in Aceh.

But police have often used the country’s tough anti-pornography legislation to criminalize members of the LGBT community, and there have been a recent string of arrests.

Prejudice against transgender people has long been widespread in Indonesia but the discrimination is particularly acute in Aceh where Islamic law rules.

“It’s very strange that officers (in Sunday’s incident) would arrest innocent people and cut off their hair,” said gay rights activist Hartoyo, who like many Indonesians goes by one name.