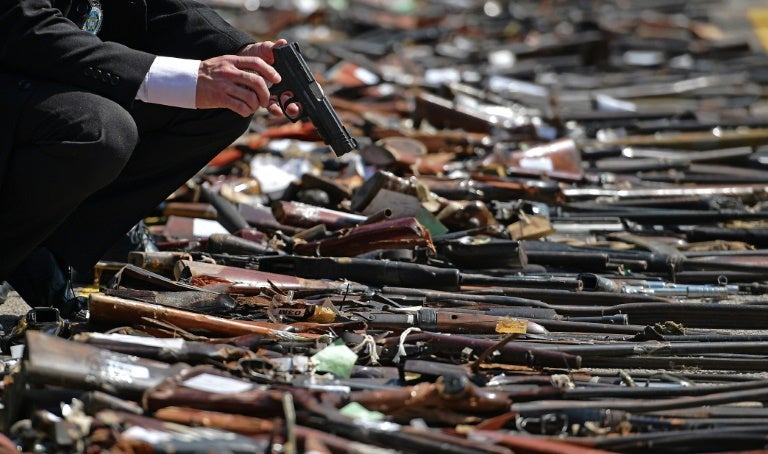 Guns seized by police forces during various criminal investigations over the last ten years, before their destruction at a military base in Rio de Janeiro on December 20, 2017. Image: Carl de Souza / AFP

In the middle of the street or a crowded mall, Brazilians hurl themselves to the ground as if struck by lightning, in scenes that are filmed and posted on the internet, where they are taking the crime-plagued country by storm.

“What’s that shot?” says a voice, accompanied by the sound of a gunshot, that accompanies the moves on the video.

It’s the latest rage: Brazilians, some of them celebrities, fake being shot and fall to the ground, or into swimming pools or ponds, then get up smiling and start to dance.

But not everyone finds the gags amusing.

The line comes from a song that promises to be the hit of Brazil’s antipodean summer and which already has more than 20 million views on Youtube.

She was discovered by Brazil’s queen of funk, Anitta, who invited her to film her latest clip, dancing in a gold-colored bikini, in one of Rio’s favela’s, the often violent shanty towns that criss-cross the city.

But the buzz has left some in this country, plagued by one of the highest rates of shooting deaths in the world, less than amused.

“At a time when we are struggling for security … people are making videos like this, as if they were victims of a shooting,” complained actress Joana Balaguer.

But Jojo shot back with a clarification on her Instagram account. She explained that in the favelas, the phrase is used in the gay community to politely express surprise.

“Don’t talk about things you haven’t seen in a favela. I would never make music that incites violence. Learn how to correctly translate things,” she said. AB

Jerusalemites show a leg for worldwide ‘No Pants’ ride