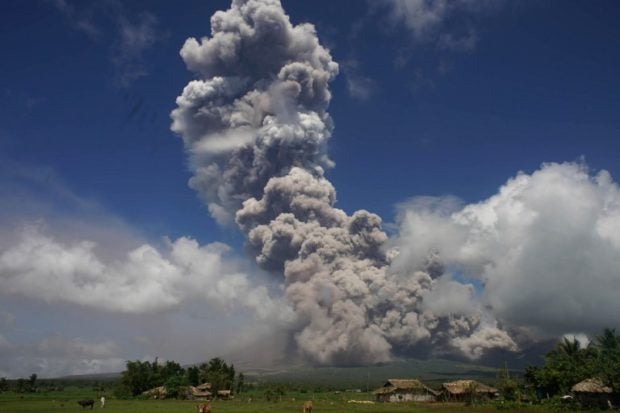 A giant plume rises from the Mayon volcano when it erupted on Jan. 22, 2018. The Phivolcs said on Monday, Jan. 29, 2018, that volcanic activity was less violent in the past few days but said a bigger eruption was still possible. AFP FILE

Volcanic activity on Mayon has become less intense compared to last week but the Philippine Institute of Seismology and Volcanology (Phivolcs) said a more violent eruption could still take place.

Phivolcs director Renato Solidum said the height of the ash plumes that Mayon generated over the past days were lower compared to the first days when it erupted.

On Jan. 22, the Phivolcs recorded a five-kilometer high ash plume and a 700-meter high lava fountain episode that forced the agency to immediately raise to alert level of Mayon to four.

Despite the decrease in height of its ash columns, Solidum said Mayon’s crater continued to swell, leaving the possibility of a destructive explosion.