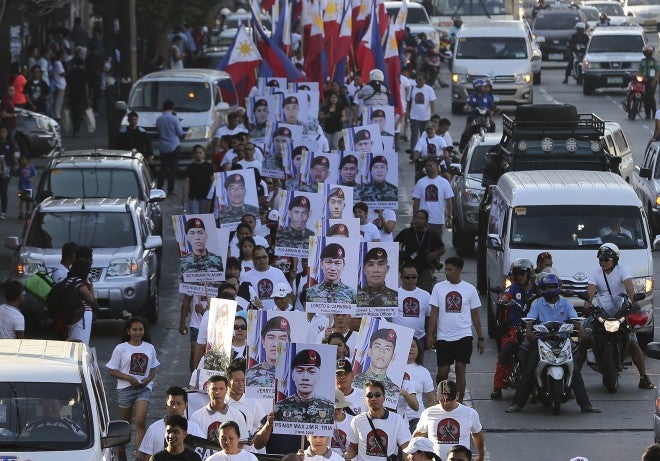 Family and supporters march as they hold some of the pictures of the 44 police commandos killed during an operation against Southeast Asia’s top terrorist suspect Malaysian Zulkifli bin Hir, also known as Marwan, as they join a “Sympathy Walk” in Quezon City on March 8, 2015. AP FILE PHOTO / AARON FAVILA

President Rodrigo Duterte will make sure that the truth behind the 2015 botched Mamasapano operation will be uncovered, Malacañang said on Thursday.

Presidential Spokesperson Harry Roque said Duterte does not want a repeat of the bungled anti-terror raid that claimed the lives of 44 Special Action Force (SAF) commandos.

“President Rodrigo Duterte does not wish a repeat of such a waste of lives and promising future of galant Filipinos even as he vows to uncover the truth behind this botched operation and find a just closure for the bereaved families who lost a husband, father, brother, or son,” Roque said in press briefing in India.

He said “the nation remembers the heroic sacrifice” of the 44 SAF commandos though he admitted that “the cry for justice for our Fallen SAF 44 heroes remains elusive.”

The Palace official urged “all members of the police today to look back to the sacrifice of their fallen colleagues.”

“Honor their memory by reliving their values of integrity and courage as you perform your duty to serve and protect the nation,” he said.

“To our people, let us offer the most solemn prayer for our Fallen SAF heroes. We also pray for their bereaved families that their grief may soon be appeased through the attainment of justice,” he added.

Duterte, through Proclamation No. 164, has declared January 25 of every year as Day of National Remembrance for the 44 SAF troopers killed during the botched Mamasapano in January 2015. /jpv