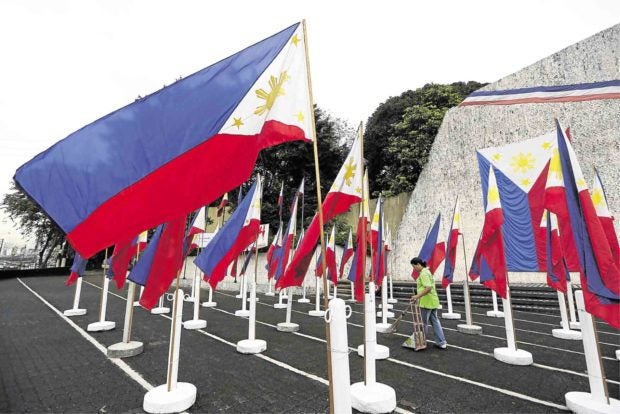 ANNIVERSARY Philippine flags flutter at the People Power Monument on Edsa, Quezon City, in
memory of 44 police commandos who were killed by Moro rebels in Mamasapano, Maguindanao
province, on Jan. 25, 2015. —NIÑO JESUS ORBETA

ZAMBOANGA CITY — The widows of the US-trained police commandos who were killed in the Mamasapano massacre three years ago lament that they appear to be waging a lonely battle for justice.

Merlyn Gamutan, the widow of Senior Insp. Joey Gamutan of the elite 55th Special Action Force (SAF) Company, said that while a few people, including some officials of the Duterte administration, still remembered how their husbands died to protect the country from terrorism, it seemed most Filipinos have forgotten what happened at Tukanalipao in Mamasapano, Maguindanao province, on Jan. 25, 2015.

On that day, 44 SAF commandos of the Philippine National Police died in a battle with Moro rebels that followed an operation to kill Malaysian terrorist Zulkifli bin Hir, alias Marwan, who carried a $5-million price put up by Washington on his head.

Gamutan said the widows and relatives of the 44 SAF commandos had been conducting activities, such as concerts and film showing to keep the memory of their husbands alive.

Last week, she said, the widows held a public showing in Zamboanga City of the documentary, “Fallen not Forgotten,” which was produced by Caelistis Productions in memory of the SAF 44.

The documentary, which featured interviews from survivors of “Oplan: Exodus,” the SAF operation to get Marwan, is scheduled for screening on Thursday in movie houses at 34 Robinsons and SM shopping malls across the country.

“We have conducted several activities like this so that the people would somehow remember the SAF 44 and their sacrifices,” Gamutan told the Inquirer.

Lhea Tabdi, whose husband, Chief Insp. Gednat Tabdi, died in the clash while leading his men from the 84th SAF Company, said what happened remained painful for the widows, especially because justice remained elusive.

While charges have been filed against people who they believe were responsible for the debacle, including former President Benigno Aquino III and former PNP Director General Alan Purisima,  nothing much has happened, Tabdi said.

“Nothing significant has happened up to this time but we continue [to fight],” she said.

Former PNP Director Getulio Napeñas, the SAF commander at the time who failed to coordinate the mission with the military, is also facing charges for the debacle.

Gamutan said the widows from Cordillera were tirelessly following up the case.

“It’s been three years now, nothing has happened. But we are hoping that this administration, of Duterte, can do something against former President Benigno Aquino,” Gamutan said.

Tabdi said the widows also continued to offer prayers for their late husbands.

Tabdi said the widows were also in constant communication and prior to the third anniversary of the massacre had gathered at the cemetery in Zamboanga City, where some of the SAF 44 had been buried.

On Thursday, Tabdi said the widows would converge again on Forest Lake Memorial Park and Roman Catholic Cemetery here to honor the memory of their husbands.

Tabdi, who was six months pregnant when her husband died, said she would always tell their 2-year-old son, Gael, how his father sacrificed his life for his country.

“I will always tell my son the heroism of his father. I will keep it alive for my son,” she said.