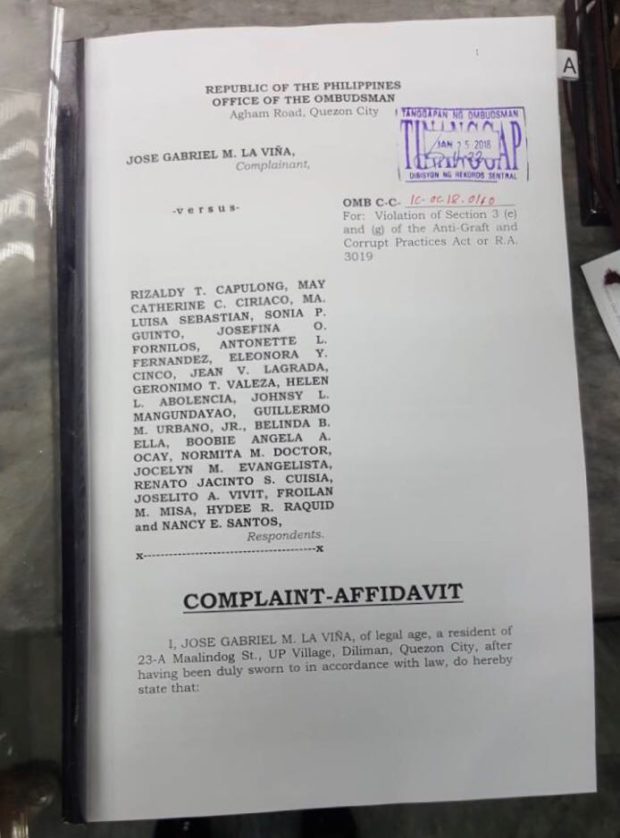 Social Security Systems (SSS) executives have been slapped with a complaint for graft and corruption over alleged illegal disbursements worth P145 million from 253 anomalous contracts.

SSS Commissioner Pompee La Viña on Thursday filed a criminal complaint for violation of Section 3 (e) and (g) of the Anti-Graft and Corrupt Practices Act against 21 SSS executives before the Office of the Ombudsman.

Four officials—-Sebastian, Guinto and another department manager who died last year, and Ciriaco-—were the persons who recommended and negotiated the contracts, La Viña said.

“They compromised transparency by unilaterally deciding among themselves who will be bestowed the millions worth of media contracts without the proper procurement process,” La Viña said.

“In the same vein, by just entering into contracts left and right with every media outfit at their sole discretion, there was no way to determine competitiveness of the offer/proposal with other media outfits,” the SSS commissioner said.

The approved procurement plans (APP) for 2016 and 2017, La Viña said, showed that the mode of procurement used by the respondents with different media companies was “Direct Contracting.”

“The alternative mode of Direct Contracting cannot be used as the mode of procurement in entering into the subject media contracts, since it is not proprietary in nature,” La Viña said.

In addition, La Viña said the procurement of media services did not pass through the Bids and Awards Committee (BAC) and there was no procurement monitoring report (PMR), as certified by Santos, BAC secretariat and CEO III.

“To state, for every media contract entered into by respondents through Direct Contracting, there were no industry surveys conducted; no posting in PhilGEPs, SSS website and conspicuous place. There was also no Request for Quotation (RFQ); and no identification of the BAC of the supplier,” he said.

La Viña cited Section 12 of Republic Act 9184 which states that “the BAC shall be responsible for ensuring that the Procuring Entity abides by the standards set forth by the procurement law and its IRR (Implementing Rules and Regulations).”

“The BAC also failed to monitor the procurement activities on media services through the preparation of a Procurement Monitoring Report (PMR) that shall be submitted to the Government Procurement Policy Board (GPPB) on a semestral basis,” La Viña said.

Moreover, La Viña said the procurement of media services was never made part of the annual audit plan.

“There was also no Compliance Audit conducted, hence, there is not a single audit finding on the millions of illegal disbursements for media contracts,” the complainant said.

INQUIRER.net tried to get the side of the respondents in La Vina’s complaint through the SSS Media Affairs Department.

But SSS senior communications analyst Beth Soralbo said she was not sure if they would issue a statement regarding the complaint since they have their own respective lawyers.