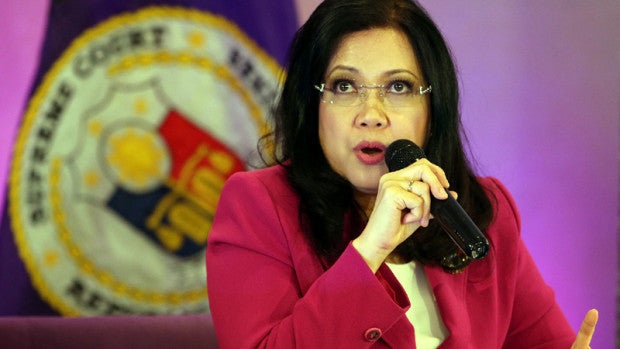 “She will take care of it.”

A Court of Appeals (CA) justice, testifying at the impeachment hearing against Chief Justice Maria Lourdes Sereno, said she found it to be lack of delicadeza on the part of Sereno to act on the dispute between the House of Representatives and the CA over the case of six Ilocos Norte officials who were detained by the House for refusing to testify on the alleged fund misuse by the provincial government.

But CA Associate Justice Remedios Salazar-Fernando admitted she had no personal knowledge of the conversation showing the supposed interference between Sereno and then CA Presiding Justice now Supreme Court Associate Justice Andres Reyes Jr. when they met in June to discuss the issue.

Fernando cited Reyes as relaying Sereno’s message that “the Chief Justice and the Supreme Court will protect the Court of Appeals” in its tiff with the House.

A day before the Sereno-Reyes meeting, the House good government committee issued a show-cause order to CA Associate Justices Stephen Cruz, Edwin Sorongon and Nina Antonio-Valenzuela telling them to explain why they should not be cited in contempt for ordering the six Ilocos Norte officials freed from detention in the House.

Sereno, in her Sept. 25 counter-affidavit, confirmed she “conferred” with Reyes about the Ilocos Six issue, but denied having “instructed” the CA to “defy” the House.

She said as Chief Justice, she was “duty-bound to protect the independence of the judiciary, which would be endangered if three CA justices were to be called to account for their judicial action” by the House.

Citing Reyes, Fernando said Sereno “advised the three justices to file a petition for prohibition before the Supreme Court at siya na raw ang bahala [and she will take care of it].”

Fernando said her colleagues were unable to react to the message relayed by Reyes because “we didn’t know what that meant.”

During the impeachment hearing, Fernando initially said she could not “jump to a conclusion” on Sereno.