Nene Pimentel: Do not rush Cha-cha, do not threaten 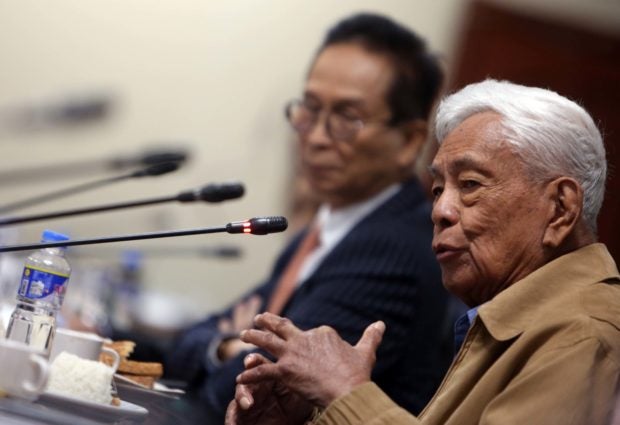 Former Senate President Aquilino “Nene” Pimentel Jr. on Saturday said Congress should not rush the shift to a federal system to give Filipinos enough time to appreciate the benefits of the proposed Charter change (Cha-cha) and warned that threatening local governments in order to speed up the process was unconstitutional.

Pimentel reminded lawmakers that it was their duty to defy any threat that deprived the people of what they were entitled to under the Constitution, referring to Speaker Pantaleon Alvarez’s statement that he would withhold funds for local governments whose leaders did not support federalism being pushed by President Duterte.

“In the caucuses, for example, you can speak out freely to express what you feel so it would be made known to the Speaker that nobody stays in power forever,” Pimentel said at Saturday Forum in Annabel’s restaurant in Quezon City.

“There’s always an end to the power of a man,” he said.

In a speech to Iloilo provincial officials on Thursday, Alvarez said: “I am not the type to force anyone. If you don’t join us, okay. I respect that. It’s your right. But like I say, you should also respect my right to give you zero budget, right?”

Asked if it was appropriate for Alvarez to make the zero budget threat, Pimentel said: “I don’t know about you, but for me it’s not.”

“I doubt that you [could] deprive a particular congressional district of what it is entitled to simply because your congressman does not conform with the Speaker. I do not believe that is allowed by the Constitution,” he said.

He said it was unlikely that constitutional amendments could be completed in three months as had been stated by Alvarez.

“The objective is good but the people should know what they are supporting, and that is why, I think, it will take more than three months,” said Pimentel, who supports a federal system of government.

Alvarez has said Congress would pass the draft federal Constitution by May so that a plebiscite could be held simultaneously with the barangay and Sangguniang Kabataan elections.

He said any constitutional amendment could be considered adopted if three-fourths of all members of the House and the Senate voted jointly, not separately, to accept it.

He said the House could go ahead with Cha-cha even without the Senate’s participation because it had the numbers to fulfill the three-fourths requirement for amending the 1987 Constitution.

Senators, however, insist that the current Constitution directs separate voting by the Senate and the House in a constituent assembly (Con-ass).

Allies and critics of the President on Saturday spoke out against the Speaker’s threat. For many officials, however, the threat was unnecessary because most of them supported federalism anyway.

Ilocos Norte Gov. Imee Marcos said federalism was a “good advocacy” of the President and agreed that it was time “to reduce the power of imperial Manila” because it had neglected communities in places far from the capital like Mindanao.

She added, however, that the shift to federalism should not be pursued at the expense of the provinces.

“That’s not Congress’ money, that’s public money. It should go to the people,” Villar said. “Remember, we are a bicameral system. The Senate and the House of Representatives are equal bodies. The Senate will not allow the House to remove local budgets.”

Marcos and Villar spoke to reporters in Science City of Muñoz, Nueva Ecija province, where they were guests at the 5th Uhay Festival, the city’s rice production celebration.

In Manila, Kabataan Rep. Sarah Elago branded the Speaker’s threat as a “desperate move to silence the opposition.”

“Kabataan party-list vehemently condemns not only the existence of pork barrel in the national budget despite having declared unconstitutional years ago, but also the outrageous use of these funds as political leverage to bully and threaten the opposition,” Elago said in a statement.

Some Mindanao officials wondered how Alvarez could withhold the funds intended for local governments when the law required no precondition for their release.

Assemblyman Zia Adiong of the Autonomous Region in Muslim Mindanao said local government units (LGUs) “enjoy an immediate and regular release of the national share (of the budget) through the internal revenue allotment (IRA).”

“Regardless of position on the issue of constitutional amendments, there is no legislative measure that can withhold the funding intended for each LGU,” Adiong said.

In Negros Occidental, former Gov. Rafael Coscolluela asked who gave Alvarez “the right to treat the budget like it was his money?”

“This is nothing but undisguised blackmail,” he said.

Agusan del Sur Board Member Santiago Cane, a supporter of federalism, said the release of the IRA should “not be subject to the whims of whoever is in the reigns of power.”

Negros Occidental Gov. Alfredo Marañon Jr. said the threat made by Alvarez didn’t affect them since they supported Cha-cha.

Speaker Alvarez did not make threats but only “a reminder that every action has an equal and opposite reaction,” according to Bulacan Rep. Jonathan Sy-Alvarado.