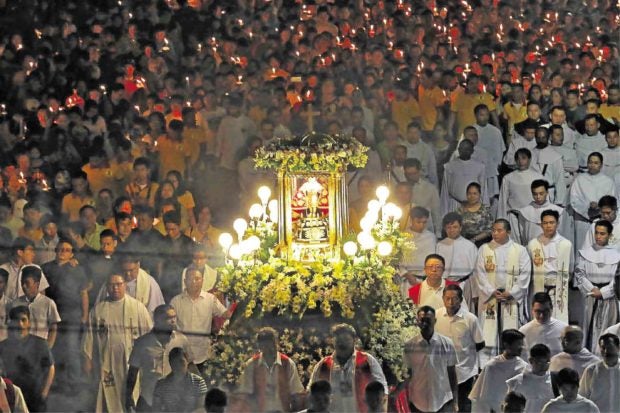 The Sinulog festivities kicked off on Jan. 11 with the “Walk of Jesus” procession to the Basilica Minore del Sto. Niño which was attended by thousands of devotees. —Christian Maningo / CEBU DAILY NEWS

At least one million people are expected to converge on the city streets to witness the 31 dancing contingents, puppeteers, floats and “higantes” (giant papier-mache figures)  participating in the Sinulog Grand Parade.

Officials see a much sober crowd after Mayor Tomas Osmeña banned the sale and distribution of liquor within the 300-meter radius of the parade route to avoid a repeat of last year’s stampede which was caused by intoxicated youths.

He also prohibited concerts, shows, performances, gigs, recitals and events in these areas from Jan. 19 to 21.

But the Cebuanos are not complaining since the ban brings back the event’s focus on the religious aspect, which is to celebrate the Feast of the Holy Child Jesus.

The image of the Holy Child Jesus was given as gift by Portuguese explorer Ferdinand Magellan to Cebu’s Hara Amihan after she was baptized in 1521.

Amihan, who was later named Queen Juana; her husband, Rajah Humabon, who was baptized as Don Carlos; and about 800 natives were the first batch to receive Catholicism in the country.

The 4-century-old wooden image of the Sto. Niño de Cebu is now encased in a bulletproof glass in a side chapel inside the Basilica Minore del Sto. Niño in the city’s downtown, which has been visited and venerated by throngs of devotees.

This year’s Sinulog celebration kicked off on Jan. 11 with the “Walk With Jesus” dawn procession. Activities started to peak on Friday during the annual “traslacion,” or the ritual transfer of the images of Sto. Niño and Our Lady of Guadalupe from the basilica to the National Shrine of St. Joseph in Mandaue City for an overnight vigil.

On Saturday, the images were brought to Nuestra Señora de Regla National Shrine in Lapu-Lapu City—the first time in 37 years.

The Augustinian fathers, the first missionaries who arrived in Philippine soil and the caretakers of the Sto. Niño image, extended the traslacion from Mandaue to Lapu-Lapu City, in response to requests from many Oponganons who wanted to be visited by the images.

The images stayed at Nuestra Señora de Regla National Shrine for two hours before sailing down the Mactan Channel on board a Navy vessel.

An elevated platform which towered over the BRP Agta LC-290 was purposely put up at the bow for people to easily see the images. 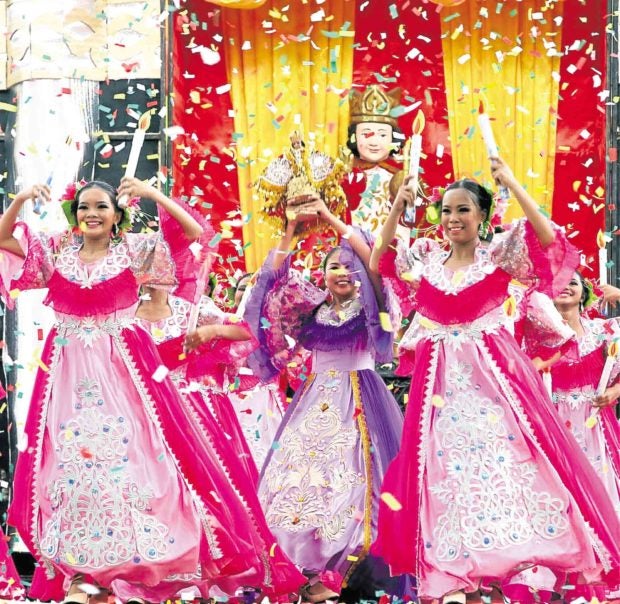 Talisay City Central Elementary School defended their title when they won Sinulog sa Lalawigan. Their performance in the Sinulog Grand Parade is among those being looked forward by spectators. LITO TECSON/CDN

“We’re privileged to have been given the chance to ferry the Sto. Niño,” said Ensign Maria Amanda Precious Zamuco, public affairs officer of the Naval Forces Central.

Unknown to many, the Sto. Niño de Cebu has held a military rank of a captain general since the Spanish rule as manifested in its sash, boots and belt studded with old Spanish coins. It was specifically recognized as Celentisimo Capitan General de las Esfuerzas Española en Filipinas (Most Esteemed Captain General of the Spanish Forces in the Philippines).

In 2011, the image was given the title “Lord Admiral of the Sea” by the Philippine Navy in acknowledgment of Christ’s lordship over seafarers, mariners and the marine ecology.

The fluvial procession was followed by the reenactment of the first Mass, baptism and wedding at the basilica’s Pilgrim Center.

In the afternoon, at least one million devotees joined the grand procession of the Sto. Niño image along the city’s main streets. On the feast day itself, Cebu Archbishop Jose Palma would preside over the Pontifical Mass at the basilica’s Pilgrim Center at 6 a.m. on Sunday.

But side by side with the Church-led activities were the Sinulog Grand Parade and dance competition which was expected to draw at least a million people. Last year’s revelry gathered about 1.5 million.

The out-of-town contingents are from North Cotabato, Catbalogan in Samar, Abuyog in Leyte, Panglao in Bohol, and Daanbantayan town in northern Cebu.

Absent this year are the two grand champions in last year’s dance showdown—Lanao del Norte and the Sinanduloy Cultural Dance Troupe of Tangub City. Both groups took home P1 million each after winning the Free Interpretation and Sinulog-based categories.

Sinanduloy won 12 times—the most number of championships under its belt in the 38-year history of the Sinulog Festival. Last year, it announced that it would not be joining this time to give its members a chance “to upgrade” and improve for future competitions.

For the second straight year, Ballesteros said the “carousel route” would not be used in the street dancing so as not to exhaust and drain the performers.

“After performing at the grandstand, they can just wait for the announcement of winners. In that way, it won’t be too tiresome on the part of the contingents,” he explained.

A total of 45 floats, 25 higantes and eight puppeteers will take part in what has been considered the “mother of all Philippine festivals.”

They were expected to showcase fresh concepts and new dance elements, Ballesteros said. “That is what the judges and the spectators want. And so we challenge the groups to come up with different stories—something that will stand out,” he told the Inquirer.

About 5,000 policemen and troops from the Armed Forces of the Philippines Central Command were deployed to secure the people during the events in honor of the Sto. Niño.

As the Sinulog dance competition continued, overflowing crowds of devotees trooped to the Basilica Minore del Sto. Niño and the outdoor Pilgrim Center to attend Masses and visit the original icon of the Child Jesus.

“In the midst of all obstacles that we go through in the country and in our homes, people go here to take refuge. The more they are challenged, the more they grow in faith,” he added.

Read Next
From diamond in the rough to ‘Gem’
EDITORS' PICK
IATF to LGUs: Issue ordinances vs attacks on frontliners, COVID-19 patients
Quick chat with Nicole Andersson: ‘You really don’t need much to be happy’
Robredo spox thanks Duterte for defending VP’s efforts vs COVID-19
Diokno to Duterte: OK to make fun of buck tooth, but focus on people’s needs first
Nograles: Cabinet members to donate 75% of monthly salary to aid COVID-19 fight
10 Filipinos positive for COVID-19 in UK, 7 in Ireland — envoy
MOST READ
Coronavirus hotbed Rizal to shut borders on April 6
Gov’t mulling quarantine period extension of 15-20 more days
Sotto on Isko Moreno’s call: We do our job without the media following our every move
‘Money Heist,’ ‘Tales from the Loop,’ ‘Killing Eve,’ ‘Never Have I Ever,’ ‘After Life’: Five not-to-be missed series this April
Don't miss out on the latest news and information.