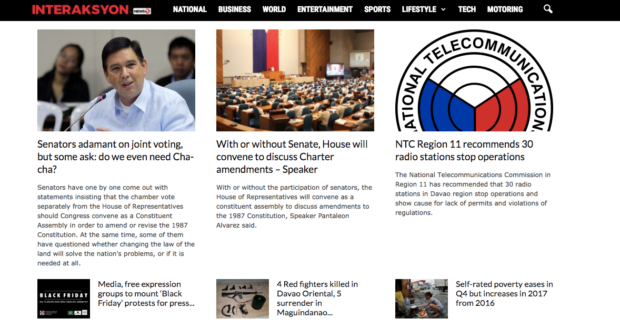 “TV5 will consolidate all digital news properties under news5 [online],” Alampay told the Inquirer. “That consolidation translates to a rationalization of manpower a well.”

Apart from TV5 and Businessworld, PLDT’s media assets under Mediaquest Holdings also include a controlling stake in the Philippine Star.

It would still be possible for InterAksyon news site to continue under a “consolidation plan” under Philstar Global Group, Mediaquest president Ray Espinosa said on Thursday.

“Mediaquest is actually studying the possibility of continuing InterAksyon under the Philstar Global group and thereby consolidate all of our online news publications under the said group,” Espinosa said.

This plan will also apply to Bworld Online, the website of Businessworld. He said consolidating online activities would streamline operations and also reduce expenses.

“Mediaquest is working with the Philstar Global group to determine the feasibility of implementing this plan in a cost efficient manner,” Espinosa said, adding that the study would determine their staff requirements.

TV5 president Vincent “Chot” Reyes said last October that the TV5 Group would undergo yet another shift in strategy to control costs and lure more viewers. This came about as TV5 launched a four-year partnership with multimedia sports entertainment company ESPN Inc., part of The Walt Disney Co.

In line with this shift, TV5 would focus on sports television and news while doing away with the expensive production of entertainment shows, Reyes said. The partnership with ESPN led to the rebranding of TV5’s Sports 5 to ESPN 5.

Reyes, at the time, did not rule out further job cuts at TV5, which had been in the red since it was acquired by the PLDT Group in 2009. He hoped profitability would be reached by 2019.

In early 2017, TV5 axed about 100 positions, a decision PLDT chair and CEO Manuel V. Pangilinan said would help keep the television unit afloat. Apart from TV5 and Businessworld, PLDT’s media holdings also include a controlling stake in the Philippine Star.