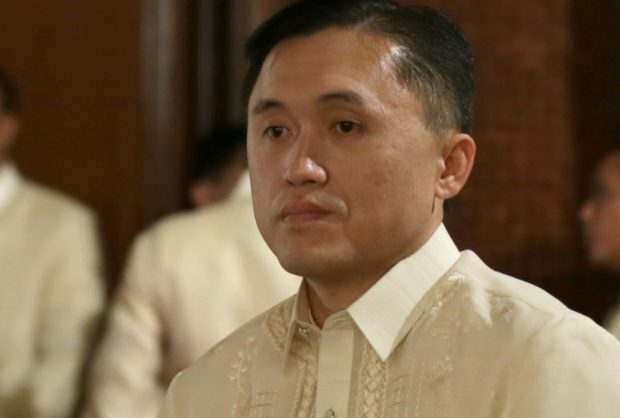 The Department of National Defense (DND) on Wednesday cleared Malacañang and Special Assistant to the President Christopher “Bong” Go of “interference” in the selection of a  weapons system supplier for the Philippine Navy’s P15.7-billion warship program.

In a statement, the DND said neither Malacañang nor Go gave any “hint or guidance” that would have influenced the outcome of the Navy’s Frigate Acquisition Project (FAP).

“The secretary of national defense is confirming that no intervention or interference by Secretary Bong Go happened,” the statement said.

“There was neither hint nor guidance from the Palace or from Secretary Bong Go to influence the implementation of the project,” it added.

The DND statement clarified that Defense Secretary Delfin Lorenzana erred in assuming that a controversial document, which favored a South Korean weapons system supplier, had come from Go.

Lorenzana stuck a Post-it on the document with a note, dated Jan. 12, 2017, telling the then Navy chief, Vice Adm. Ronaldo Joseph Mercado, to rebut it.

“To Admiral Mercado,” Lorenzana wrote. “Ronald, This was given to me by Bong Go. Go over it and prepare a report/rebuttal to be submitted to the Pres.”

“The document that (Lorenzana) alluded to have been given to him by Secretary Bong Go was handed to him at the Palace, so he assumed that it came from Secretary Go, the Special Assistant to the President and Chief of the Presidential Management Staff (PMS),” the DND said.

It noted that one of the tasks of the PMS was routing and endorsing documents to government agencies for action.

“The subject document originated from Hanwha, one of the proponents for the combat management system that were postqualified by the Philippine Navy for the FAP,” the statement said.

“(Lorenzana) forwarded it to (Mercado) for appropriate action, who, in turn, gave it to then Commodore Robert Empedrad, the chairperson of the Frigate Project Management Team at the time,” it added.

Mercado was abruptly dismissed last month amid a dispute over the choice of defense system provider for two frigates that the Navy had ordered from HHI.

Mercado preferred the Tacticos CMS because it was compatible with the combat management systems of the Armed Forces of the Philippines.

In its statement on Wednesday, the DND said Empedrad, who replaced Mercado, wrote a reply stating the preferred CMS of the Philippine Navy, “subject to the terms and conditions of the contract.”

“There is a contract for the FAP, which was crafted mainly by the Philippine Navy and it will be implemented strictly to the letter,” it added.

For his part, Go denied having ever seen the document or handing it over to Lorenzana.

“I have never  seen the controversial document that is alleged to have come from me, much less, handed the same to SND Lorenzana.  In fact, I will resign if it can be proven that I intervened,” Go said in a statement.

“My name has been unfairly dragged in this issue. I  am not privy to the frigate transaction of the DND,” he said.

Go emphasized that the frigate project “was already a done deal in 2016 during the time of former President (Benigno) Aquino (III).”

Presidential spokesperson Harry Roque said that the acquisition memorandum for the project was entered into on June 7, 2013.

On Jan. 24, 2016, the final technical specifications for the  procurement of the frigates was approved by then Defense Secretary Voltaire Gazmin, Roque said.

He added that the bids for the project were submitted and opened on March 16, 2016.

“On June 9, 2016 — prior to the term of President Duterte— after full qualification has been completed, the winning bidder was appointed,” Roque said.

“Now on June 30, as you all know, the President assumed office and the only involvement of the Duterte administration in this regard is the ministerial issuance of the notice of award,” he added.

He also said Magdalo Rep. Gary Alejano should go after Aquino administration officials if the frigates were of “inferior technology.”

“Tell Alejano to vent his ire on his yellow friends, please,” he added.

In a privilege speech late on Monday, Alejano called on the government to cancel the project, claiming the Navy had been “baited” by the contractor into going for inferior technology and giving up its right to choose the vessels’ defense system.

Alejano asked whether the contractor, Hyundai, had a backer in Malacañang, disclosing the document handed to Lorenzana in the Palace.

President Rodrigo Duterte defended Go in a talk with reporters on Tuesday, but said he would ask him to resign if there was evidence against him.

“If you can find (evidence) I will ask Bong to resign tomorrow, if he did intervene even for one word,” Mr. Duterte said.

He indicated that he did not believe Go intervened in the Navy project, describing his longtime aide as a “billionaire.” —WITH A REPORT FROM NIKKO DIZON