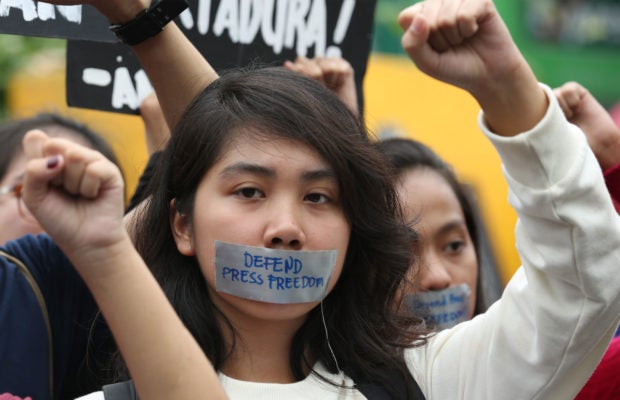 PROTEST Members of the College Editors Guild of the Philippines rally on Wednesday at Mendiola, Manila, against a decision by the Securities and Exchange Commission to close the online news site Rappler,warning that media critical of President Duterte were targets of repression. —JOAN BONDOC

President Rodrigo Duterte and Rappler locked horns over fake news and press freedom after the Securities and Exchange Commission (SEC) decided to shut down the online news site for alleged violations of the Constitution and corporate regulations.

In a scathing attack against Rappler a day after the SEC made public its decision, the President on Tuesday called it a “fake news outlet” that published stories “rife with innuendos and pregnant with falsity.”

“Since you are a fake news outlet, then I am not surprised that your articles are also fake,” he said. “We can debate now. Tell me where is our lies and I’ll tell you where are yours.”

“You’re not only throwing toilet paper. You’re throwing shit at us. You have gone too far,” he added.

“The President knows who produces fake news in the Philippines, and it certainly is not Rappler,” Gloria said. “He doesn’t have to look far from where he sits in Malacañang.”

She has denied the charge, saying she herself has been a  victim of fake news.

Rappler’s reports have included allegations that the Duterte administration has “weaponized” social media to discredit and generate online hate against his most vocal detractors.

The SEC revoked Rappler’s certificates of incorporation and registration for allegedly violating the constitutional restriction on 100-percent Filipino ownership and control of mass media entities.

Rappler has denied any foreign control over its operations and would appeal the decision.

Francis Lim, a lawyer for Rappler, cited a Supreme Court ruling saying that “control … is done through [the] board of directors who manages the company.”

“If there is any violation at all, we believe that the penalty meted out by the SEC is too severe,” Lim said in an interview with ANC television on Wednesday.

Mr. Duterte said he couldn’t care less whether Rappler continued to operate or not, and challenged it to prove that he was behind the SEC’s move against it.

“Why would I have it closed? I don’t even know that son of a bitch SEC. They are all Aquino appointees,” he said.

Solicitor General Jose Calida on Dec. 22, 2016, requested an inquiry into the “possible contravention of the strict requirements of the 1987 Constitution,” the SEC said.

Calida denied Malacañang ordered him to pursue the case against Rappler, saying he was “just doing [his] job.”

Presidential spokesperson Harry Roque on Wednesday defended Mr. Duterte’s lengthy rant the day before against Rappler and other news organizations he considered unfair to him and said he did not mean to threaten the press.

“What you are seeing from the President—or what you saw for instance from the President last night—is also the exercise of free speech on the part of a President who feels that he has not been getting the right kind of treatment from the media,” he added.

Mr. Duterte ridiculed Rappler’s argument that the SEC decision constituted harassment. “Look, why should you complain if I am critical against media? Are you not critical of me?” he said.

Foreign press organizations and human rights groups have rallied behind Rappler, joining a chorus of domestic outrage among the media and political opposition at what they see as moves to muzzle those scrutinizing Mr. Duterte.

Shawn Crispin, the senior Southeast Asia representative of the New York-based Committee to Protect Journalists, on Wednesday said the “politicized” move by the SEC represented “a clear and immediate danger to press freedom in the Philippines.”

The Philippine Center for Investigative Journalism said the SEC’s “harsh” decision came with “horrifying implications on the full and untrammeled exercise of press freedom.” —With reports from Nikko Dizon, Allan Nawal, and the wires