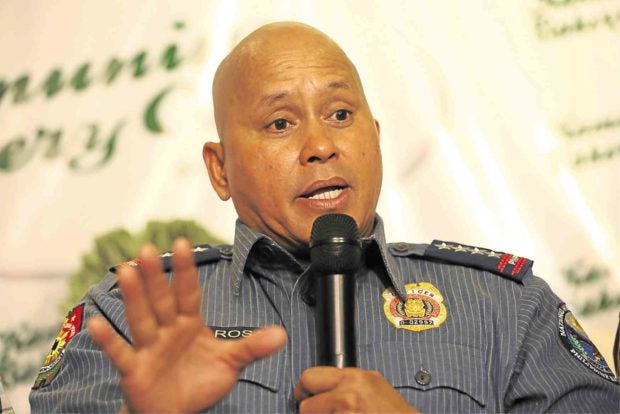 CAMP OLIVAS, Pampanga — Five-peso coins and 20-peso bills casually thrown by cargo-hauling truckers at a section of the national highway in Nueva Ecija province got six policemen in hot water for alleged extortion.

“It has become the habit of truckers to toss P5 along the road. The coins are gathered by civilians employed by policemen,” said Chief Supt. Amador Corpus, Central Luzon police director, to explain the system that led to the arrest of six policemen in Carranglan town on Tuesday morning.

The Philippine National Police Counter-Intelligence Task Force (PNP-CITF) based at Camp Crame in Quezon City on Wednesday filed criminal and administrative cases against the six policemen.

They allegedly victimize truckers going to and from Cagayan Valley region.

Corpus removed the six policemen from their posts.

“They really are bad. Why would they do something like that? They deserve to be dismissed from the service. I will make sure of it,” he said.

The extent of the supposed racket has not yet been determined. It is not known how many trucks pass the Digdig route daily. The CITF seized cash worth P2,440 during the entrapment operation.

Truck drivers contacted by the INQUIRER said the practice had been going on for years.

Several checkpoints dotting the national highway from the provinces of Cagayan, Isabela, Nueva Vizcaya, Nueva Ecija and Bulacan have been the subject of complaints, mostly from traders who transport goods from Cagayan Valley to Metro Manila and other parts of Luzon.

“The practice has survived several presidents and their campaigns against graft and corruption, so we have grown hopeless. It has been accepted as a normal thing,” said a truck driver employed by a grains trader from Cabatuan town in Isabela.

Sometimes, bribes could range from P20 to P500, depending on the nature of goods being shipped. Higher bribes are usually collected for products with dubious documentation, such as lumber or logs, or livestock that require shipping permits.

Senior Supt. Jose Chiquito Malayo, PNP-CITF head, said Bulanadi had allegedly been demanding money from the operator so his equipment would not be seized.

Corpus described the arrest of the policemen as “unfortunate,” having issued a series of memoranda reminding Central Luzon police personnel to “never engage in illegal activities.” —Tonette Orejas, Melvin Gascon and Jeannette I. Andrade