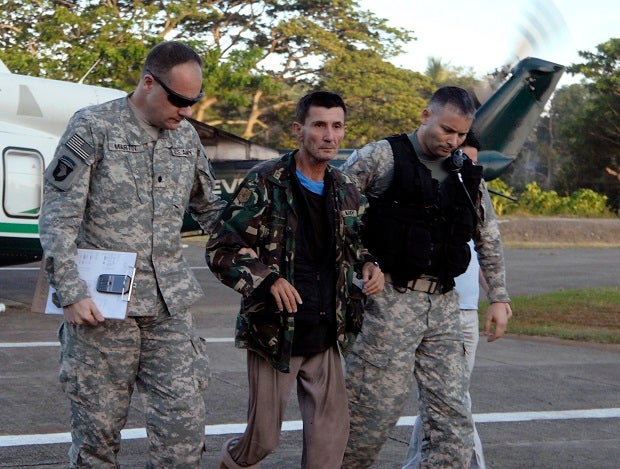 In this March 23, 2013 file photo released by the Armed Forces of the Philippines Western Mindanao Command, Australian hostage Warren Richard Rodwell, center, arrives at the Command’s headquarters in Zamboanga city in southern Philippines following his release by Al-Qaida-linked militants after 15 months of jungle captivity. AP

ZAMBOANGA CITY — An Australian who was kidnapped by Abu Sayyaf bandits in Zamboanga Sibugay province in 2011, has petitioned the Supreme Court to transfer his case from a court in Ipil town to a court in this city or in Metro Manila due to security concerns.

Warren Rodwell said he attended the case conference in Ipil on Monday to work out the transfer of the venue of the case he filed against 50 people behind his abduction.

Rodwell identified SPO2 Jun Alpha Malban as the policeman who served as negotiator for the Abu Sayyaf. Malban, reportedly a cousin of Abu Sayyaf leader Khair Mundos, was arrested in Malaysia in May 2015.

Only five of the 50 suspects in Rodwell’s abduction had been arrested.

Rodwell was living in Ipil for a year when armed men took him from his house in December 2011. He spent about two years in captivity.

Both the Australian and Philippine governments declined to say if ransom was paid when Rodwell was freed in Pagadian City on March 23, 2013.

Despite concerns about his safety, Rodwell said he would attend all hearings and would not back out. —Julie Alipala