Albay declares state of calamity under threat of Mayon eruption

LEGAZPI CITY — For several days now, most residents of Albay province have their eyes fixed at the glowing crater of Mount Mayon as it continues to spew ash, smoke and lava.

But the volcano’s “fireworks” have not only attracted the attention of locals. “Day tourists” have been coming to this capital to watch Mayon up close.

“Most visitors are domestic tourists. There are fewer foreign tourists because of the canceled flights. But if the weather improves, we expect more tourists to come,” said Dorothy Colle, head of provincial tourism office, referring to visitors who do not spend a full day in the city. 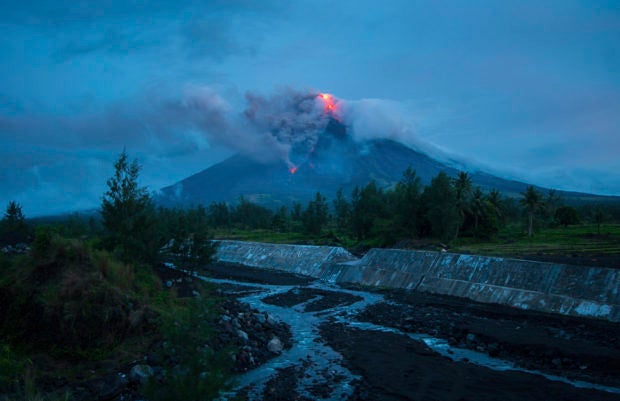 Lava cascades down the slopes of the Mayon volcano as seen from Busay Village in Legazpi city, Albay province, 340 kilometers (210 miles) southeast of Manila, Philippines, Tuesday, Jan. 16, 2018. More than 9,000 people have evacuated the area around the Philippines’ most active volcano as lava flowed down its crater Monday in a gentle eruption that scientists warned could turn explosive. (AP Photo/Dan Amaranto)

On Tuesday, the provincial board declared Albay under a state of calamity due to the threat of the eruption of Mayon.

Board Member Joseph Philip Lee, head of the board’s committee on crisis and emergency management, said the declaration would allow local governments to use their calamity funds to provide assistance to affected areas.

Lava spurting from Mayon volcano lit up the night sky on Monday in what scientists said was a sign of increasing activity that prompted official calls for evacuation of areas under threat from a major eruption.

But even as thousands of residents flee, tourists are flocking to this city, some 330 kilometers southeast of Metro Manila, to watch and photograph the spectacle, Danny Garcia, a spokesperson for Albay province told Agence France-Presse (AFP).

“It’s a spectacle to watch. It’s beauty and fury in one, especially at night. But it’s a natural phenomenon so we don’t know when an (explosive) eruption will happen,” Garcia said.

Mayon, a near-perfect cone that also draws thousands of tourists during its periods of quiet, rises 2,460 meters (8,070 feet) above Legazpi, a city of about 200,000 people surrounded by a largely agricultural region.

Tourists have been taking selfies, “groufies” and pictures of the lava fountains on Mayon’s crater from buildings and shopping malls.

Others chose to watch the fiery spectacle from Ligñon Hill and from the Oriental Hotel in Legazpi City, and from the famous Cagsawa Ruins in Daraga town, where the iconic bell tower destroyed, buried by the volcano’s eruption in 1814, stands.

Colle, however, reminded tourists to stay at safe vantage points. “We are asking tourists to stay beyond the 8-kilometer-radius danger zone because we need to prioritize their safety,” she said.

The state volcanology institute described the natural pyrotechnics as “short-duration lava fountaining,” an escalation from the slow lava flow from the crater a day earlier.

“If lava has enough gas and material, fragments will be flown up into the air, like the fountain you light up on New Year’s Eve,” Renato Solidum, chief of the Philippine Institute of Volcanology and Seismology (Phivolcs), told AFP.

“There is more force involved when the lava would exit so it’s more intense than just the lava oozing out,” he said.

Ash also rose 2 km into the sky in the past 24 hours, enveloping surrounding areas in a grey carpet as more residents left their homes for safety.

About 30,000 people in and around Legazpi have fled their homes, the provincial government said on Tuesday, more than double the official count on Monday.

Solidum, in a telephone interview, said Mayon was displaying a “nonexplosive magmatic eruption” or “lava effusion.”

“It was a new magma which is why it is red. But it is nonexplosive because it doesn’t belch out volcanic materials,” he said.

Solidum said their records showed that nine episodes of tremor, associated with four short-lived lava fountaining and rockfall events, were monitored on the volcano. The collapsed lava generated a 2-km lava flow on the Miisi and Buyuan gullies.

“Alert level 3 remains in effect over Mayon Volcano, which means that it is currently in
a relatively high level of unrest as magma is at the crater and hazardous eruption is possible within weeks or even days,” Phivolcs said.

Alert level 4 means an eruption is possible “within days” while level 5 is when a hazardous eruption is under way.

Solidum said Phivolcs had yet to decide on the possibility of raising the alert level since it needed data from observations and measurements.

Ed Laguerta, Phivolcs resident volcanologist, said they were waiting for the result
of the geodetic and geochemistry surveys, which would measure gas content, earthquake strength and other seismic activities on the volcano.

“In 2014, it (Mayon) ran out of gas which prevented an eruption from happening. We need to measure gas now … We need to be sure how strong the eruption would be,” he said.

The Department of Social Welfare and Development has monitored 4,659 families (18,793 people) staying in 23 evacuation centers in the towns of Camalig, Daraga, Guinobatan, Ligao, Malilipot and Santo Doming towns and Tabaco City. Some 1,184 families (4,936 people) are staying with relatives in Daraga.

The DepEd said classes for more than 10,000 students were disrupted as they moved out of danger zones and as their schools were used as evacuation centers.

The Department of Public Works and Highways (DPWH) has prepositioned heavy equipment and service vehicles to aid in road-clearing operations, the evacuation of residents, and the delivery of relief goods.

Danilo Versola, DPWH director for the Bicol region, has ordered three DPWH district engineering offices to keep a close eye on roads and rivers that may be affected by lava from the volcano.

“In a worst-case scenario, we identified alternate routes to prevent the isolation of [towns] highly vulnerable to ash plume and volcanic mudflows or lahar,” he said in a statement. —Reports from Michael B. Jaucian, Ma. April Mier, Rey Anthony Ostria, Julie M. Aurelio, Jaymee T. Gamil, and the wires