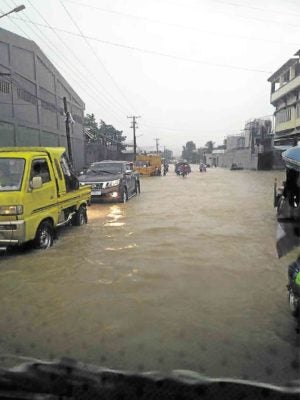 Heavy rains flood parts of Eastern Visayas region, including a section of Nula-Tula district outside the city center of Tacloban in Leyte province. —CONTRIBUTED PHOTO

DAVAO CITY — Four people were killed after a landslide hit Compostela Valley province on Sunday, bringing the death toll to eight as heavy rains poured over parts of the Visayas and Mindanao in the last four days.

Reports from the Compostela Valley Provincial Disaster Risk Reduction And Management Office said the victims were recovered underneath debris and mud two hours after a landslide hit Barangay Tandik in Maragusan town at 8:30 p.m.

Senior Supt. Marvin Pepino, provincial police director, said the victims — Rowena Sajulan, 22; and siblings Raymond, 19, Hazzel, 3, and Joey, 1, all surnamed Magallanes — were inside their house when mud and debris came crashing down on them in Purok Bulawanon.

Village officials and watchmen, according to Pepino, were able to rescue Rowena’s brother, Alvin, 11.

This happened as Compostela Valley and many parts of Mindanao, which were still recovering from the impact of Severe Tropical Storm “Vinta” (international name: Tembin) last month, experienced moderate to heavy rains starting Sunday morning.

Last week, three people were swept away by floods in Lanao del Norte province. In Tacloban City, a woman died after a concrete fence collapsed and hit her house.

The Philippine Atmospheric, Geophysical and Astronomical Services Administration said the rains were brought about by the tail end of a cold front. As early as Sunday, the weather bureau had warned of the possibility of floods and landslides hitting parts of Mindanao. The state weather bureau advised local disaster response officials and people living near mountain slopes to be alert.

Officials in the Compostela Valley towns of Monkayo, Compostela, Montevista, New Bataan, Nabunturan and Mawab suspended classes in their areas on Monday due to heavy rains.

The cancellation of classes was ordered due to continuous rains and thunderstorms in the Davao region, said Franz Irag, spokesperson for the Office of Civil Defense in the region.

As of Monday morning, knee-deep floods were reported in the villages of Basak, Magsaysay, New Dauis and Magading in Nabunturan town.

In Davao del Norte province, disaster response officials said they were closely monitoring water levels at Saug and Liboganon rivers for possible overflowing, which could threaten the low-lying and rice-producing towns of Kapalong, Carmen, Asuncion and New Corella.

In the Visayas, heavy rains triggered flooding in a relocation site in Ormoc City in Leyte province.

In Eastern Samar province, two incidents of landslides hit Jipapad town but no one was reported hurt.

“Fortunately, there were no classes at that time,” he said.

Another landslide hit Barangay 5 in the town center.

At least 140 families from several villages in the Jipapad town center moved to the town hall and the church to avoid rising floodwaters.

Knee-deep floods also forced 298 families to move from a resettlement site in Ormoc City to evacuation centers on Sunday night.

At least 1,172 people, mostly from Block 20 of Tzu Chi Great Love City in Barangay Liloan, stayed at the barangay hall, covered court and Liloan National High School while waiting for water to subside.

According to Ciriaco Tolibao Jr., city disaster risk reduction and management officer, Block 20 at Tzu Chi Great Love City, where 1,565 families live, is the lowest portion of the resettlement area susceptible to flooding during heavy rains. —Reports from Frinston Lim, Joey A. Gabieta and Robert Dejon