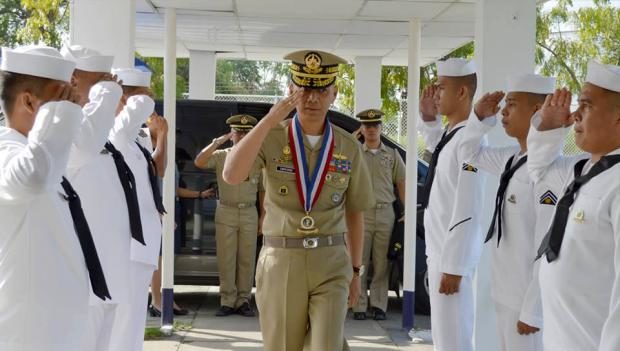 Malacañang Palace took special interest in the Philippine Navy’s controversial selection of the weapons system supplier for the P15.7-billion frigate program as early as January 2017, the Inquirer learned recently.

Documents obtained by the Inquirer showed that in a span of two weeks in January 2017, the Palace, the Department of National Defense (DND), and the Navy discussed the issue hounding the combat management systems (CMS) of the Navy’s frigate program.

It included a letter to President Rodrigo Duterte from the Navy explaining why it preferred Tacticos CMS of Thales Nederlands, Inc. over Hanwha Thales (HTC) for the CMS of the frigates.

Malacañang’s attention to the CMS was indicated in a marginal note, dated Jan. 12, 2017, made by Defense Secretary Delfin Lorenzana to Vice Adm. Ronald Joseph Mercado, then Navy flag officer-in-command (FOIC).

“To Admiral Mercado,” Lorenzana wrote on a post it. “Ronald, This was given to me by Bong Go. Go over it and prepare a report/rebuttal to be submitted to the Pres.”

The Defense chief then affixed his signature.

Go is Duterte’s right hand man, who was formally given a Palace position as the special assistant to the president (SAP) and head of the Presidential Management Staff (PMS).

The unsigned two-page letter that Go gave Lorenzana assailed the Navy’s preference for Tacticos CMS while it highlighted the advantages of choosing the Naval Shield Integrated Combat Management System (ICMS) of HTC of South Korea for the frigates.

The Inquirer asked Lorenzana to confirm the letter he received from Go and his subsequent instruction to Mercado. The Defense chief has yet to reply as of press time.

Even before Mercado was able to send a reply to Go, Go’s office sent a letter to then Commodore Robert Empedrad dated Jan. 18, 2017, through the DND, asking him to attend a meeting on Jan. 20, 2017 at the New Executive Building of Malacañang.

Empedrad was then the chairman of the Navy Frigate Project Technical Working Group.

“We would like to specifically discuss with you the issue on CMS selection,” said the letter from Go’s office, written on the letterhead of the Office of the President. It was signed by Lloyd Christopher Lao, an undersecretary in Go’s office.

Three days later, Empedrad submitted a two-page letter addressed to Duterte, through Go and the chief of the Defense Acquisition Office of the DND, explaining the Navy’s choice of Tacticos Thales over Hanwha.

“This has reference to the letter from the Undersecretary, Office of the Special Assistant to the President requesting the Frigate Acquisition Project (FAP) Project Management Team (PMT) for justifications in choosing the Combat Management System (CMS) for the two (2) frigates of the Philippine Navy (PN) in response to the letter of Hanwha Thales Co. (HTC),” Empedrad wrote.

It is not clear whether the unsigned letter that Go gave Lorenzana was the letter from HTC which Empedrad referred to in his letter to Duterte.

But the words used in the unsigned letter and Empedrad’s reply were similar.

The letter from Go, written in broken English, claimed that while “Thales CMS,” apparently referring to Tacticos CMS, has “many sales records of CMS in many countries including Korea… the End-Users of the many countries has (sic) been suffering from their poor supports (sic) of logistics services and upgrade or modernization of their outdated CMS because they are putting all non-recurring/ development costs for the logistics and upgrade to the foreign customer only due to small number of ships in their home countries with high margin as their profits policy.”

The letter said that the Korean Navy was set to “discard” Thales from its “OEM [original equipment manufacturer] portfolios” because of the above-stated reason.

It also said that “Hanwha will provide Philippines Navy (sic) the most economic and effective logistics and upgrade etc. (almost free riding or on boarding) after delivery or (sic) brand new CMS with the logistic supports based on large number of government funding supports.”

Moreover, Hanwha was prepared to provide “real time 24 hours logistics support in every fleet of Korean (N)avy and will establish a team for Philippines Navy in their fleet with real time network with Korean teams.”

The letter mentioned that the Navy prefers Tacticos CMS because of its compatibility with the Tactical Data Link (TDL) 16, a requirement of the Armed Forces of the Philippines (AFP) C4ISTAR (Command, Control, Communications, Computers, Information/Intelligence, Surveillance, Targeting Acquisition and Reconnaissance).

But the letter insisted that Hanwha is developing its own “Link 16 with CMS that will be validated within 2019”, before the delivery of the first frigate in 2020.

The letter also belied the supposed claim of the Navy that Hanwha “doesn’t have export records out of Korea” and listed the Royal Malaysian Navy and the Korean Navy as some of its clients.

In Empedrad’s letter to Duterte, he said that the FAP PMT “preferred Tacticos CMS over Naval Shield ICMS” because Tacticos CMS “is one of the leading Combat Management Systems in the world considering that it is being used by 23 foreign countries to over 172 ships.”

Tacticos CMS is also compatible with the TDL 16 requirement of the AFP, while “Hanwha’s Naval Shield ICMS’ compatibility with TDL 16 is still under development phase but could not be operational by 2019,” Empedrad said.

“HTC’s claim that many countries using Tacticos have been suffering from their poor support of logistics and upgrade of their outdated CMS cannot be validated for there is no available verified report which supports said allegation,” he said.

“In addition, there have been repeat orders from Germany, Indonesia, and Turkey that indicate their satisfaction on Tacticos CMS,” Empedrad told the President.

Empedrad also said that while HTC offers to provide a “most economic and effective logistics and upgrade, etc” it was something that would need to be validated “later on.”

“In view of the foregoing, the Frigate Acquisition Project PMT sustains its preference on Tacticos of Thales Nederlands as the CMS for the two (2) PN Frigates,” Empedrad said.

He also attached to the letter to Duterte a power point presentation “for the detailed justifications.”

Empedrad is now the acting Navy flag officer-in-command after the unceremonious firing of Mercado on Dec. 19, supposedly for pushing for Tacticos Thales as the Navy frigate’s CMS supplier when the Department of Defense had already chosen Hanwha Thales Co.

Curiously, the HTC consortium was dissolved in October 2016, and Hanwha renamed itself as “Hanwha Systems.”

The Thales Group is a French multinational company that caters to the aerospace, defense, transportation and security markets. /atm