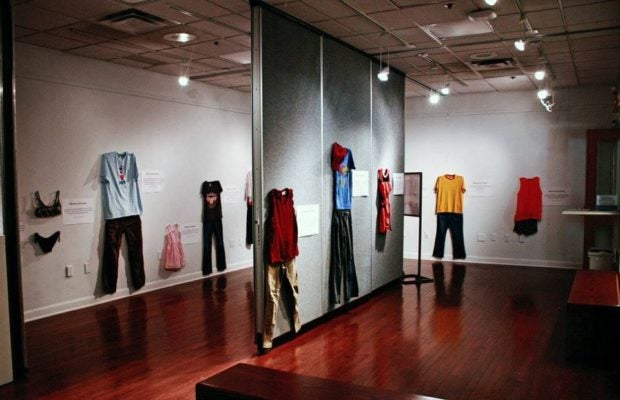 Long polos, dresses, pajamas, a My Little Pony shirt, and a police uniform hang in a community center in Brussels.

They are part of a display called “What were you wearing?”, a troubling question usually asked of rape victims after they are abused.

The exhibit features replicas of rape survivors’ outfits based on accounts of their attack. The Brussels Times reports that the survivors are female students at the University of Kansas.

While the question puts responsibility on the victim and adds to the trauma of their experience, the exhibit aims to dispel the myth that sexual assault is caused by a person looking provocative and that victims “ask for it.”

The clothes show the disturbing reality that anyone can become a victim. According to the United Kingdom-based site Rape Crisis, “rape is an act of violence and control; the perceived ‘attractiveness’ of a victim has very little to do with it.”

Next to each clothing is a brief description of the attack, which also emphasizes that victims tend to remember details of the attack vividly.

Beside one shirt that the Huffington Post shared, a description reads, “What were you wearing? My favorite yellow shirt, but I don’t remember what pants I was wearing. I remember being so confused and just wanting to leave my brother’s room and go back to watching my cartoons.”

Another shows a Wonder Woman-printed shirt which reads, “I missed a couple days of work after it happened. When I told my boss, she asked me this question. I said ‘A T-shirt and jeans, b*tch, what do you wear to a basketball game?’ I walked out and never came back.”

The project is a collaboration between the university and the Prevention Service Projects in the commune of Molenbeek-Saint-Jean.

The university began the art project in 2013 and has since been exhibited in other schools in the United States. The display is in Europe for the first time from Jan. 8 to 20. Niña V. Guno/JB

7 Ways We Promote Rape Without Realizing It